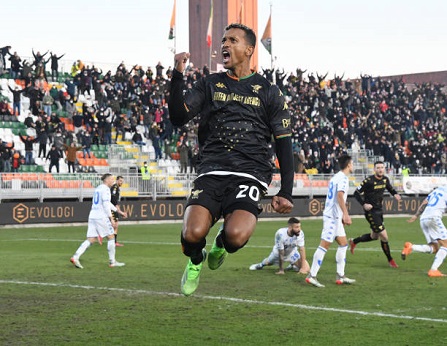 Sunday afternoon saw Portuguese internationals Nani and Sérgio Oliveira both make their debuts for Italian sides Venezia and Roma respectively, and things could scarcely have gone better for the duo in Serie A.

Nani’s eagerly anticipated showing in Venice came against Empoli, where he was introduced as a late substitute and the Seleção legend immediately made the difference by creating an equaliser. Meanwhile in the capital, Oliveira scored from the spot to hand Jose Mourinho’s Roma a 1-0 win over Cagliari.

The arrival of Nani in Venice has captured the attention of many since the announcement on Friday. The 35-year-old signed an 18-month contract at the Stadio Pier Luigi Penzo and was immediately included in the squad for Sunday’s meeting with Empoli as Gli Arancioneroverdi continue their battle to avoid relegation.

Nani was named among the substitutes and when called upon to make his entrance on 72 minutes, Venezia found themselves trailing 1-0 to Szymon Żurkowski’s first-half goal. Within a minute the Portuguese had turned the game, with Nani exchanging passes with Mattia Aramu before setting up David Okereke to equalise.

“I think my debut was good,” Nani said after the match having helped salvage a point. “The team did its best, but we have to work to improve further. I think Serie A is the best league in the world, and I'm more than happy to be able to play here. I'm not in the best physical condition, but when you really want to do something good, you always succeed.”

It took Nani just a minute to make a difference off the bench on his Venezia debut. Class is permanent. pic.twitter.com/AKyyavq6Bm

Venezia boss Paolo Zanetti added: “I hadn’t wanted to play Nani, as he hasn’t trained for a month, but he’s a champion and showed his quality with just a couple of moves. We signed him to increase the quality level and this showed why. He gave us a lot — he came in and made the difference. I trust that he can become an example for our younger players, to understand how to approach the game and have fun.”

Venezia are one place above the relegation zone, with a two-point gap between themselves and Cagliari, upon their return to the Italian top flight this season after a 19-year absence. 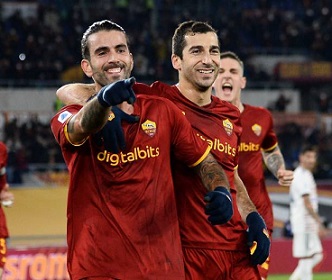 Roma helped Venezia’s cause by beating their nearest relegation rivals Cagliari 1-0 at the Stadio Olimpico, and new signing Sérgio Oliveira was the match-winner to help the Giallorossi bounce back from last weekend’s defeat to Juventus.

Oliveira, who arrived on-loan from Porto during the week, went straight into Jose Mourinho’s side for the match on Sunday evening, and was rated by statistical site whoscored.com as the Man of the Match as his penalty secured all three points.

Roma had an early penalty award reversed when Andre Carboni challenged Nicolo Zaniolo following Oliveira’s throughball. The referee changed his mind after VAR’s intervention, but Oliveira did then force a spot kick when his shot was blocked by the hand of Brazilian Dalbert and the former Porto man confidently slotted home for what proved the winner.

“The truth is that I really wanted to win this game,” Oliveira told DAZN. “We managed to win in the end. It was a pity that there were only a few fans because of the COVID restrictions. We are already thinking about the next game.

“Lorenzo Pellegrini was the penalty taker, then he had a problem. We had already agreed that I would be the second option. I’m happy that the team won. Future targets? We have to think about one game at a time, then we’ll see.”

Mourinho was full of praise for his recent recruit, admitting to reporters: “To tell you the truth, we need more Sérgio Oliveiras, players with performance, experience, who knows what to do at certain times of the game. I have said it before, he is not what you call in Italy a ‘regista’, he is not Pirlo, Pjanic, but he is a player that our team needs.

“It’s a super important win, but it’s a game for peace of mind and to score early in the second half. We totally controlled it. It’s a game that could have ended 1-1, Rui Patricio made a great save on Joao Pedro. But it’s completely out of the context of the game, which is our domain.

“We were in control, but in the end it’s the result that counts, it’s 1-0, it could have been 4 or 5-0. That’s why I always felt the pressure. When you play so well the coach doesn’t usually feel pressure, I felt it right up to the end.”