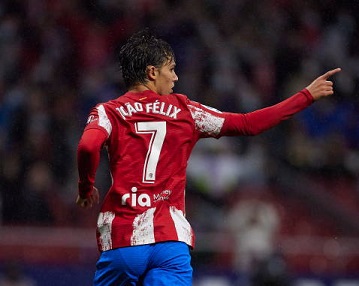 João Félix scored his first goal of 2022 on Saturday and provided a wonderful assist for Luis Suarez, as Atletico Madrid secured a much-needed victory at Osasuna. Los Rojiblancos face Manchester United in the Champions League on Wednesday and having struggled in La Liga in recent months a win was an important confidence boost.

João Félix says Atletico Madrid are looking forward to their midweek clash with Manchester United, after helping his team to a 3-0 win at Osasuna on Saturday. Félix had not scored for two months before the game but was issued a start by manager Diego Simeone, with the Portuguese repaying his coach by putting Atletico 1-0 up in the 3rd minute with an emphatic finish after the ball dropped to him in the box following a corner.

If Félix’s goal was a good start, the former Benfica man’s assist for Suarez’s second was even better. Atletico were defending when the ball fell to Félix just inside his own penalty box, and spotting the run of Suarez, the Seleção man swept a superb ball up field into the path of the veteran striker, who caught Osasuna goalkeeper Sergio Herrera off his line with a superb left-footed finish from distance.

Félix’s goal and assist could put him in contention to start against United in the Spanish capital on Wednesday, as Atleti look for a positive first-leg result. Speaking after the match, the 22-year-old hailed the performance against Osasuna, which keeps Atletico in the hunt for a Champions League place after a collapse in results ended their title bid.

“We were good, we were united and we played well,” Felix told reporters. “We got a good victory. It was a good game for me and everyone, we all did it. We are very motivated for Wednesday’s game.

“We have to continue with the same mentality and the same attitude. If the attitude is there and it's good, the quality of each of us comes out. The quality of the team is going to rise. We’re going to try to put in a great performance and win the first leg, and then we’ll see.

“The Champions League is always one of the most beautiful challenges in a player’s life. We are in good shape, motivated and with the fans with us it will be a very nice game to watch and play.”

Wolverhampton Wanderers remain on the hunt for a European place after beating Leicester City 2-1 to make it five wins from their last six league games. Brilliant strikes from Rúben Neves and Daniel Podence gave Wolves the win, which has them not just in the chase for continental football but within distance of a Champions League spot.

Bruno Lage selected five Portuguese in his line-up against Leicester, who fielded Ricardo Pereira – fresh from signing a new contract – in the visiting team. The impressive José Sá continued in goal and was joined in the starting eleven by Nélson Semedo, Neves, João Moutinho and Podence, while Pedro Neto, Toti, Francisco Trincão and Fábio Silva were named on the bench.

The goals were both from outside the area and equally well-taken. Neves put Wolves ahead with less than ten minutes played when he received a lay-off from Raul Jimenez before curling his finish inside the post past Kasper Schmeichel. Ademola Lookman levelled for Leicester, but Podence scored the winner midway through the second period with a superb low show into the bottom-left corner.

Perhaps the biggest positive, however, was the introduction of Pedro Neto for the final ten minutes. The former Braga man had not featured for around 10 months since suffering a serious knee injury against Fulham in early April. Initially expected to miss six months – including the European Championships – Neto had ultimately spent the best part of a year out of action for club and country.

Brightening up your Monday morning ✨

Relive our win against Leicester City with our two-minute highlights.

“He can bring good things for us,” Lage said of Neto’s comeback. “He’s a special player. It’s a long time without playing and we need to give him minutes like this to give him confidence. We know what he can do for us, and now it’s teamwork. Every time to keep going.

“We have Pedro, we have Hwang, we have Trincão, we have Podence, one more time he scored a goal, and it’s about going with solid things with solid performances, every time, with the chance to win points and grow up as a team.

“The next step, that’s why it’s so important the team understands what we are talking about, because it’s about character to step forward and continue to play their game with the ball and they need to continue to press. That’s what I want to do with these boys, to make them a big team.”

It was also a great Sunday afternoon for Bruno Fernandes, who registered a goal and an assist as Manchester United beat fierce rivals Leeds United 4-2 at Elland Road. United went 2-0 up in what is known as the Pennines Derby, but Leeds levelled the score at 2-2 in the second half before United regained control.

Cristiano Ronaldo was also in the visiting line-up, and the Portugal captain should have had an early assist when his pass sent Jadon Sancho through on goal, but the winger failed to convert. After Harry Maguire opened the scoring, Fernandes scored United’s second, nodding home a superb chipped cross by Jadon Sancho to give United a two-goal lead before the break.

Leeds scored twice in the space of a minute to stun United, but Fred restored the advantage and Fernandes laid on the 4th for substitute Anthony Elanga. Ronaldo was withdrawn in the latter stages, as he prepares to meet old foes Atletico Madrid in the Champions League at the Wanda Metropolitano on Wednesday.

Moving to the English second tier, there was a huge victory for Reading in the Championship as they finally won for the first time since November, beating Preston North End 3-2 away from home. Lucas João has been a huge miss for the Royals for most of the season with injury, but the former Nacional man recently made his comeback to assist in the team’s fight against relegation.

Having been on an 11-game winless run, the difference Joao makes to Reading was made clear when he struck twice to put Reading 2-0 up at Preston inside 20 minutes. While the first was a poacher’s goal, the second was João at his best as he used slick footwork to make room for his finish, which was arrowed into the top corner from the edge of the penalty box. João then assisted what turned out to be the winner for Jon Swift in the second half.

No saving this one from Lucas! 🚀 pic.twitter.com/FAkPUTY80N

Former Porto and Vitoria Guimaraes forward Tozé is a major figure in the United Arab Emirates, where he is one of the leading goalscorers in the Premier League. Tozé’s goal in a 2-0 win over Al Jazira was his 9th from just 16 appearances this season and keeps his team in the hunt for an Asian Champions League spot.

In Poland, there was a double for former Sporting midfielder Miguel Luís in Warta Poznan’s 3-1 win over Radomiak Radom. Finally, José Embaló scored for Alashkert in Armenia; Hugo Vieira struck for Maltese giants Hibernian; in Luxembourg there were goals for Artur Abreu, who scored twice for Petange, and Tino Barbosa of Differdange.