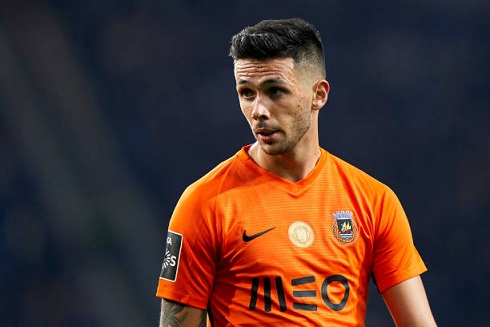 As the world watches the developments in Ukraine with great concern, for the only Portuguese footballer playing in the country the last couple of days have been an unexpected and terrifying ordeal.

Nélson Monte, formerly of Rio Ave, arrived in Ukraine to play for SC Dnipro-1 last summer, under the impression that the political turmoil in the country was unlikely to intensify into a threat to his own safety. When Russian president Vladimir Putin announced a full-scale military invasion on their neighbours on Wednesday, things changed quickly.

The Ukrainian Premier League championship was cancelled in the wake of the news, with players being informed they would all be returning to their home countries. However, before Monte could consider a route home, the severity of the situation and the extent to which his safety was under threat became frighteningly clear.

“Around 4:30 am I was woken up by a loud bang,” the 26-year-old told CNN Portugal on Thursday morning, with Dnipro one of the major cities which began reporting fighting and explosions. “I went to the window, saw smoke and was in shock. Not even two minutes later, another bomb.

“I called the foreigners who live in the same condominium as me, we took the car and went to the training centre at the club. We chose to leave the city. What I want most right now is to leave the country, but I’m having a lot of difficulties with that. If Portugal could help me right now, that’s what I need most.”

By the time Maisfutebol caught up with Monte on Thursday evening, they spoke to a young man still coming to terms with some of the things he had seen. The journey out of Ukraine appears most likely to begin at the border to Poland, but for now Monte is in a hotel owned by the Dnipro president in the city of Lviv, which is hundreds of kilometres from safety.

“The condominium where I live is huge and the images I have in my head are horrible, of people running away with suitcases and their children in their arms,” Monte says. “We got in my car and drove to the training centre to try to figure out what to do. They told us to go to Lviv, which was the closest place to go to Poland.

“I took my cell phone, wallet and passport and only brought the clothes I have on my body. It took us (Monte was joined by the club’s foreign players) almost an hour and a half to fill up the car and then news started to come out that we cannot drive at night because they fear another bombing during the night.”

Monte will, therefore, stay in the hotel overnight with the hope of making his way towards the border or another safe place on Friday. While in a safer location at present, Monte is understandably desperate to leave the country as soon as possible, with the unpredictable and varied nature of the violence leaving everyone involved fearful.

“It is possible that [we will drive to the Polish border tomorrow] but I also don’t know if I will have enough fuel to get to Poland, because I believe that the fuel will run out between today and tomorrow in the country. If not, I will have to go to Kiev, to the meeting point defined by the Portuguese embassy.

“I don’t know what could happen to me in five minutes, in an hour or overnight. We don’t even know what to do. I arrived in Ukraine yesterday morning [after the winter break] and four hours later the news came out that the championship had been cancelled for 30 days. From that I understood I would be leaving for Portugal this afternoon, but it hasn’t happened.”

“You could feel a tension”

Heightened violence in the country following Russia’s annexation of Crimea in 2014 has been covered by much of the world media, and Monte admits the situation was a consideration when he joined Dnipro last August. However, despite the tense backdrop he insists life in the country had been relatively normal as he helped his team to 3rd place in the first half of the season.

“You could feel their tension, but they handled this climate well,” he says. “For me, it was actually strange for the whole world to talk about what was happening and for them it was almost not even a topic of conversation. This caused me some confusion and sometimes I spoke with them. Now, of course, they are worried, but two or three days ago they were super calm.”

With some 137 confirmed deaths in the country as a result of the conflict on Thursday, there is unlikely to be calm in Ukraine for some time. For Monte, who has two children and a pregnant wife in Portugal, his career prospects become a futile topic of conversation as he commits all his energy towards getting home soon.

“I don’t know what my [long-term] future will be and I haven’t even thought about it. The only thing I think about is getting out of the country. And then, yes, I will seriously think about it.

“The thing I want most is to arrive in Portugal to be with my family.”

Tom-
Will the conflict impact World Cup qualifiers? If, how so? Could there be a redrawing of groups without Russia and Ukraine? Will Ukraine even be able to field a team? It would be a real shame for Scotland and Poland to receive first round...

Tom-
Will the conflict impact World Cup qualifiers? If, how so? Could there be a redrawing of groups without Russia and Ukraine? Will Ukraine even be able to field a team? It would be a real shame for Scotland and Poland to receive first round byes when Portugal and Italy still have to face each other. It is a loss for the fans regardless of whichever team wins that game. It would be better to redraw based on where each country ranks making sure that the three top teams do not face each other.

Good point Dan , let's hope this conflict in Europe resolves itself as quickly as possible , but in the meantime this could be an excuse for Uefa/Fifa to "Seed" Portugal and Italy so they don't play each other. They could also sanction the...

Good point Dan , let's hope this conflict in Europe resolves itself as quickly as possible , but in the meantime this could be an excuse for Uefa/Fifa to "Seed" Portugal and Italy so they don't play each other. They could also sanction the Russian team in a bunch of different ways.

If FIFA had any balls,, Russia would be immediately pulled from any opportunity to play in the upcoming playoffs for Workd Cup 2022.

A question to Tom Kundert or Dan da Silva. Who would replace Russia in a new draw if they were booted ? They take the next team down on the nations league list ?

How does no one see removing Russia from the qualifiers as completely wrong? I thought we were supposed to separate sports and politics. European teams face Israel during European/World Cup qualifiers and not a single protest has been made,...

How does no one see removing Russia from the qualifiers as completely wrong? I thought we were supposed to separate sports and politics. European teams face Israel during European/World Cup qualifiers and not a single protest has been made, despite the fact their government has been murdering Palestinians for god knows how long. How is it that people are now picking and choosing what war is most relevant to them. Completely unfair for the Russian team.
I don't justify the actions of their government, but allowing this to creep over into Sports is extremely hypocritical.
No one has batted an eye when it comes to playing countries such as USA and Israel..

Russia is about to booted. I would have Slovakia play Norway for that spot later this month. Redraw the teams and then move the playoffs to June.

Gee Dee
There are no comments posted here yet