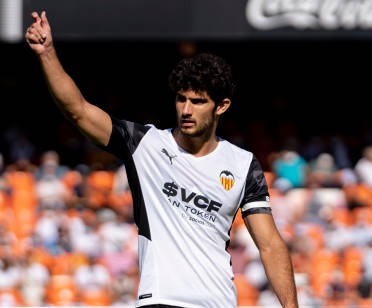 When Gonçalo Guedes headed Valencia in front against Granada on Saturday evening, he reached double-figures in league goals for the first time in his career. There is nothing misleading about the feat for the former Benfica man, who has emerged as Valencia’s key man on and off the pitch this season in Spain.

Guedes’ previous best-ever tally for league goals in a season was the eight he scored for Benfica B during his first campaign as a professional. Since graduating to top-flight football with the Eagles, the winger had never scored more than five prior to this season, making the ascent into one of La Liga’s star performers somewhat overdue for a player always tipped for greatness.

Valencia has hardly been the most stable of environments since Guedes arrived in 2017 following a short-lived stint with Paris Saint-Germain. He has played under six different managers – four permanent – in his five seasons in Spain, with the club often underachieving against the backdrop of controversial ownership.

Guedes had shown his talent in flashes, often enjoying streaks of good displays across several weeks before succumbing to injury or loss of form as Valencia became one of the more volatile clubs in the country. This season, however, the 25-year-old is racking up numbers which depict a player finally making good on the promise shown at the Estádio da Luz as a teenager.

Intriguingly, the development comes after Guedes was expected to leave Valencia last summer. A move to Villarreal or Sevilla was mooted, with a modest price-tag of between €25-35m proving too steep for potential buyers. Guedes stayed put at the Mestalla, where he has evolved into the player the club hoped when paying €40m to PSG in the summer of 2017.

Guedes is currently joint-5th in both the top goalscorers chart (10) and the assists chart (5) despite Valencia again languishing in 9th place in the Spanish top tier. A penchant for spectacular goals tends to make the Portuguese even more notable, with his sensational recent effort against Athletic Bilbao securing Valencia a place in the Copa del Rey final.

Sunday’s edition of Marca following a 3-1 win over Granada carried a story on Guedes and his increasingly important role at the club. “Gonçalo Guedes has taken on the face of a leader,” writes the paper. “On and off the field, the Portuguese has found maturity. After an explosive arrival in the league, he has had strange moments during these seasons with the injuries and drops in performance.

“But this year Guedes is different. Before Christmas [coach] Jose Bordalás predicted he would get ten goals and he has smashed it. He shows a total conviction that he transmits to his teammates. Guedes has become the benchmark; the player everyone looks for when they have a problem. And he has accepted the role. Against Athletic he scored one of the goals that marks the season and then against Granada he struck again.

“With Guedes at this level, anything is possible. Valencia grows under him and Bordalás gives him the responsibility. He commands the field, directs attacking pressure and helps in defence like never before. He is exceptional and the team knows it.”

While many in the city off the Mediterranean coast are focused on Guedes’ club form, those of a Portuguese persuasion will inevitably wonder if his positive momentum could transmit to the Seleção’s upcoming World Cup qualifiers.

There can be few players in such confident form…

On club form Leao, Guedes, Jota, Bernardo Silva, Josa Sa and Vitinha should all play. Santos would never field such a young lineup but he should.

Santos just doesnt have the risk taking ability to use a attack minded formation and with the...

On club form Leao, Guedes, Jota, Bernardo Silva, Josa Sa and Vitinha should all play. Santos would never field such a young lineup but he should.

Santos just doesnt have the risk taking ability to use a attack minded formation and with the Rueben Dias injury I see him retreating even further into his turtle shell. Quadruple pivot here we come!

Hey Val , D. Perriera and Pepe in the back ? Danilo has had a little experience from that slot for PSG and even once for the national team in a friendly.

Pepe is 39 and Fonte is 38, this might work for a 1 or 2 match knock out but they wont/should not start at the WC.

Danilo can play CB but its not his natural position and this is not club football, they arent playing Montpellier, this is the...

Pepe is 39 and Fonte is 38, this might work for a 1 or 2 match knock out but they wont/should not start at the WC.

Danilo can play CB but its not his natural position and this is not club football, they arent playing Montpellier, this is the best of the best players.

Tiago Djallo, Luis Neto, Domingos Duarte, Diogo Leite, Pedro Mendes all play and start at their clubs currently. There are others but they are either too old or play for 2nd division or leagues way out of ranking. Ferro isnt working out, he is out on loan.

I would guess some combo of Rueben Dias (when healthy) and Domingos Duarte/Tiago Djallo might work? I dont know, its up to Santos. Also consider Cancelo and Guerreiro/Semedo arent exactly LOCK EM DOWN full backs and you see the problem

Since its such a small window and 2 matches he will most likely go with Pepe/Fonte with either William or Danilo to cover as DM. Who knows...either way without Rueben its a huge hole.

Changing to 3 at the back and using some of Portugal abundance of wingers/fullbacks as wingbacks WOULD work but this is Santos so its not gonna happen.

Roll the dice my friend and pray!