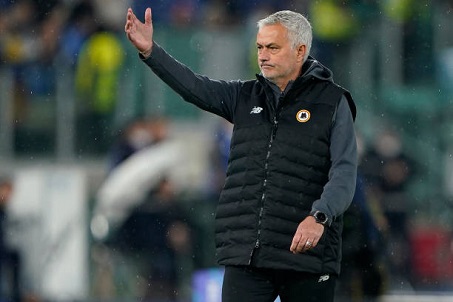 José Mourinho enjoyed perhaps the best match of his tenure with Roma so far on Sunday, as the Giallorossi thrashed arch rivals Lazio 3-0 in the Derby della Capitale.

Roma were three goals up by half time thanks to a brace from Tammy Abraham and a stunning free-kick by Lorenzo Pellegrini, allowing a raucous home crowd at the Stadio Olimpico to savour the victory over their fierce enemies.

Mourinho’s side came into the match having secured their passage through to the last 16 of the Europa Conference League against Vitesse on Thursday. Indeed, Mourinho raised a few smiles after the match against the Dutch side by lamenting that his players were in action so close to the derby, while “Lazio players spent the evening smoking cigarettes with Sarri” in reference to the opposition’s free week.

Any fears of sluggishness were relieved when Abraham put the hosts in front inside the opening sixty seconds, and the Englishman doubled his and Roma’s advantage in the 21st minute. Pellegrini’s free-kick from long range saw Roma in a commanding position at the break, with Lazio struggling to make many inroads in the second period despite being allowed to command possession.

“Great performance, the victory against Atalanta was already solid, with a team that knew what it had to do to beat this particular opponent,” Mourinho told DAZN. “Today was really special, it felt like everything we worked on and prepared, the lads put it all onto the pitch.

“Lazio tried to get a better result in the second half, played with the pride of a team in the derby, but they never really threatened and again my men deserve credit for that.”

Mourinho caught the eye just before half time when the home crowd began to chant ‘Ole’ as the Roma players passed the ball around their opponents, with the Portuguese imploring the Curva Sud to stop teasing the Lazio players.

“I don’t like those ‘ole’ things, I don’t like the impact it has on the players who hear it even at the end of the game, let alone after 43 minutes. I don’t like a player interpreting that ‘ole’ as a game being finished, or they’re putting on a show. Respect is very important. We won by three goals, could’ve had four or five, but respect for the opponent is essential.”

Finally, Mourinho was asked to comment on the upcoming World Cup play-offs, which pits Portugal - who meet Turkey in the semis - and Italy - who will play North Macedonia – in the same section of the draw to earn a place at Qatar 2022.

“You cannot expect me to be neutral. I love Italy, I thank Italy for all it gave me over the years at Inter and now too, but with all my strength I say Força Portugal! Let’s get there!” – Mourinho replied.

“You cannot expect me to be neutral. I love Italy, I thank Italy for all it gave me over the years at Inter and now too.

“But with all my strength: I say Força Portugal! Let’s get there!” pic.twitter.com/JNGrTHlfnj

"I sink was a great game. I must reminded you zat I win a derby in every country dat I coach. Zat is not me being arrogant, zat is a fact." - JOSE

Italian Jose seems to be a happy Jose. He is so different in Italian pressers and post matches...

"I sink was a great game. I must reminded you zat I win a derby in every country dat I coach. Zat is not me being arrogant, zat is a fact." - JOSE

Italian Jose seems to be a happy Jose. He is so different in Italian pressers and post matches than in England or Spain. Not just now with Roma but with Inter as well, the discussions are not about what Wenger said or what Pep did, but about tactics and players. Jose seems to found his happy place. What he is doing with this Roma squad is fantastic. It was Jose with Tiago Pinto who brought in Tammy Abraham and Rui P, it was also Jose who brought in Sergio Oliveira who was all over the pitch yesterday breaking up attacks and pushing Roma forward. He essentially changed the course of the Roma season from sputtering to a finish with Verona and Sassuolo to fighting Lazio and Atalanta for 5th.

Roma should finish anywhere from 5th to 8th in Italy, they don't have the bench strength to compete with the top 4 but next year Roma has promised huge investment in the off season with Jose and Tiago Pinto working more like family than anything else. Will be interesting to see who they go after. Could be a great destination for Portuguese talent who either want a change, need a change or aren't getting the minutes they should be (which was Sergio O case).

Roma need a winger up top and Portugal seem to be going throw a renaissance with them. Might be interesting who they go after. It was with Roma and Rudi Garcia and Luciano Spalletti where Salah developed into the star he is today, it has nothing to do with Klopp and Liverpool who bought a finished Ferrari and took credit.