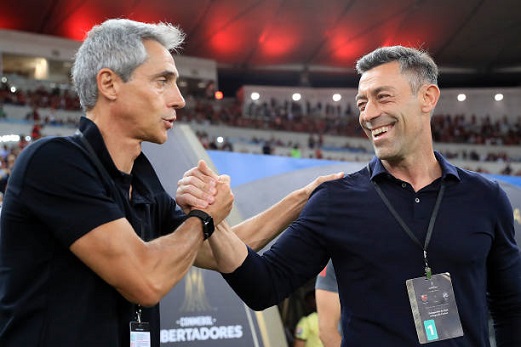 The Copa Libertadores second matchday took place this midweek across three days, and it was another generally positive round for the Portuguese quintet of managers in South America’s premier club competition.

Two Luso coaches faced off in Rio de Janeiro as Paulo Sousa’s Flamengo duly defeated Argentina outsiders Talleres de Cordoba, coached by Pedro Caixinha, while Vítor Pereira got his first win in the competition with Corinthians. Elsewhere, there was a huge win for Abel Ferreira’s defending champions Palmeiras, who battered Petrolero of Bolivia 8-1 at home, while a comeback from Renato Paiva’s Independiente del Valle means they top their group.

The meeting between Flamengo and Talleres in Group H saw Sousa and Caixinha, both of whom took over this year, greet each other on the touchline before kick-off. Sousa’s Flamengo were strong favourites and ran out 3-1 winners at Maracanã, with ex-Benfica striker Gabriel Barbosa opening the scoring from the penalty spot as the hosts went 2-0 up in 25 minutes.

Having seen his side battle valiantly by pulling a goal back before the break ahead of succumbing to a Flamengo third, visiting boss Caixinha insisted he was happy with his team. "We knew that these big teams don't like to be put under pressure and that’s what we tried to do,” he said. “We were too far away on the first goal, and this made the difference. And after the second, the team didn't lose focus, and we finished better than Flamengo in the first half, especially with the goal.

"Against this opponent, Córdoba [in the home match] will be different. It's not easy to be losing so early against Flamengo, that's why I'm proud of the work the players did. We are on the right track."

For Paulo Sousa, back-to-back wins in the Libertadores which come either side of a frustrating 1-1 draw on the opening day of the Brazilian league at Atlético Goianiense. Sousa’s position at the club has already come into question, with reports suggesting fan favourite and countryman Jorge Jesus could be lined up as his replacement, leading the current Fla boss to speak on such rumours.

“We have to understand that it is normal for fans to have sympathy for A or B, whether it’s players or coaches who came and are no longer here,” Sousa began. “What is not normal is for you to have a certain passionate agenda for a coach A or player B. It's not normal, not for the fans but for you [the press]. It doesn't seem respectful to me. But it's part of the game and doesn't affect us.” 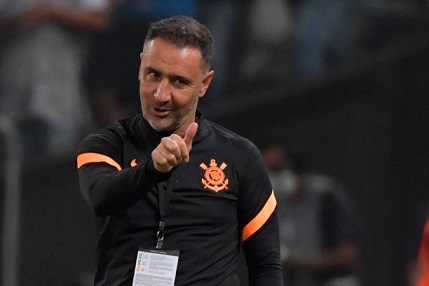 Vítor Pereira was the only one of the five Luso coaches not to win on the opening matchday, following Corinthians’ 2-0 defeat to Always Ready in Bolivia. The result put pressure on the Brazilian side ahead of their meeting with Deportivo Cali of Colombia on Wednesday, and in front of their home fans in Sao Paulo, Pereira’s team managed a 1-0 victory.

An own goal by Deportivo Cali substitute Jose Caldera midway through the second half proved vital in Group G, where all four teams are on three points following Boca Juniors’ 2-0 win over Always Ready in Buenos Aires. Speaking after the match, Pereira appeared captivated by his surroundings in Brazil.

"It was a game where you saw everything,” Pereira said. “You saw the Corinthians spirit on and off the field. The fans, once again... For you it's usual, but for me, who's travelled the world, I've never seen anything like it. They support from the first to the last minute and transmit the energy we need. There was a bit of suffering too, but it's part of the game and I think it was a fair result,”

Abel Ferreira was suspended for Palmeiras’ home match with Independiente Petrolero on Tuesday night, but the defending champions showed no negative effects as they hammered the Bolivian side 8-1 in Sao Paulo. Remarkably, Verdão trailed 1-0 to a 6th-minute Erik Correa strike and did not draw level until the 41st minute through Ze Rafael, and the teams went into half time all-square at 1-1.

22-year-old forward Rafael Navarro stole the headlines by scoring four goals in the space of around half an hour after the re-start, after which Rony and Raphael Viega (2) made the scoreline emphatic. Having won the competition twice in a row, Palmeiras’ impressive start to their pursuit of a hat-trick has them already enjoying a four-point lead at the top of Group A.

Abel has spent recent days continuing his push for reform of the Brazilian football calendar, which remains one of the most gruelling on the planet.  Palmeiras’ continental success and achievements in the Paulista State Championships meant they had already taken part in an incredible 21 matches before the start of the Brazilian league last weekend, which they began with a shock 3-2 home defeat to Ceara.

“We entered the season very strongly, as a result of the competitions we had,” Abel said. “The calendar is there and we are not going to change, we have many competitions. We lost the World Cup, we won Recopa and Paulista. We have Libertadores, Brasileirão, the Brazilian Cup.

“The tiredness affects everyone, not just to the players, I am made of flesh and blood. A team will emerge champions in the end. [Against Ceara] we have the feeling that the game did not go well for us. We will recover these players mentally and physically. This is a marathon, game by game,” concluded Abel, who later re-posted quotes from Pep Guardiola on injuries to players due to fixture congestion.

Another coach unable to guide his side from the touchline this week was Renato Paiva, who is still yet to achieve the requisite licence to coach in the Copa Libertadores with Ecuadorian champions Independiente del Valle. Paiva made history with Independiente by securing their first league title last year, but issues over his licence continue to sideline him from continental competition.

Paiva had to watch Independiente’s win at America Mineiro in Brazil last week from the stands, and again had to take a view from a distance in Wednesday’s home clash with Colombians Deportes Tolima. Paiva’s men were 2-0 down at half time but a red card for the visitors just before the break facilitated a comeback and the game ended 2-2. Independiente top Group D with four points.