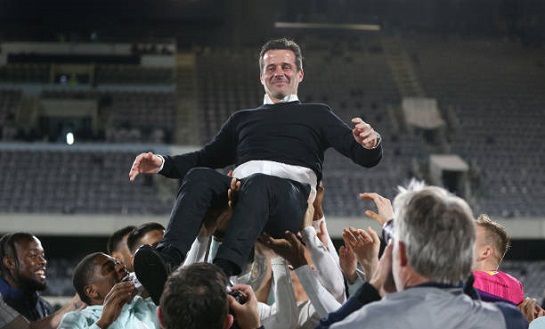 Portuguese boss Marco Silva will be back in the Premier League next season after his Fulham side clinched promotion from the Championship on Tuesday night with victory over Preston North End.

The Cottagers have been outstanding in the English second tier this season with a free-flowing attacking style, and a 3-0 win at home over Preston means Silva’s side assured themselves of a top-two place with four matches left to spare.

Portugal under-21 international Fábio Carvalho got his name on the scoresheet at Craven Cottage to ensure an extra special evening for Portuguese at the west London club. Carvalho, whose form this campaign has reportedly earned him a move to Liverpool, scored with a classy finish on 34 minutes while top scorer Aleksandar Mitrovic scored a brace.

“The feeling is fantastic,” Silva told Fulham’s official website after the match. “To start, congratulations to the players. I’m really proud of them, they deserve it. It’s a fantastic achievement for us. It was our aim from the first day. To get direct promotion with four games to play is a fantastic achievement for us, but one thing that makes me even prouder of these players is the way we did it.

“We were so dominant almost all season: the way we played, the way we performed; the way we developed players and gave the chance to some young players to perform and got the best out of others. It’s been fantastic and I’m proud of the players and all of my staff. Everyone around me, in the club, medical staff, the kit men, people from the gate at the training ground and the kitchen. They always do their best to give the players the best conditions to play at our level.

“And lastly but the most important is the fans. We thank them for their support. I know that the last few seasons for all football fans have been a difficult time due to the pandemic situation, they spend a long time without participating with the club they love. Last season was really tough for this football club and we have the opportunity to give them this fantastic feeling. I have to thank them for their support.”

There is still plenty to play for during the remaining four matches for Silva’s team. Not only does the Portuguese wish to clinch the Championship title, but Fulham are on course to contest the record for most goals scored during a season – a record of 108 currently held by Manchester City from the 2001-02 season.

Fulham have notched 98 goals so far from their 42 matches, meaning they would break the record on their seasonal average. Next up for the Premier League bound side is a trip to 2nd place Bournemouth, who are still fighting to secure their promotion under manager Scott Parker, who departed Fulham to take the job last summer.