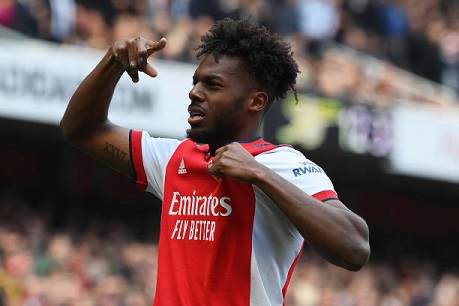 Cristiano Ronaldo returned to action for Manchester United this weekend, and the Portugal captain drew widespread praise for his performance on an emotional afternoon at the Emirates against Arsenal. It was a match dominated by Portuguese involvement, including a first Arsenal goal for Nuno Tavares and a costly penalty miss by Bruno Fernandes.

Ronaldo was not the only 37-year-old Luso forward in the goals this weekend, with Flávio Paixão making history in Poland by becoming the first-ever foreign player to score 100 goals in the Ekstraklasa. On-loan Benfica winger Jota also found the net this weekend, as Celtic moved closer to winning the Scottish Premiership.

Arsenal hosted Manchester United this weekend in what was anticipated to be a crunch fixture in the battle for a top four place. The Gunners were searching for a win to follow their impressive victory at Chelsea in midweek, whereas out-of-form United arrived in North London knowing that defeat would all but end their hopes of Champions League football. Qualifying for Europe’s foremost club competition means a windfall of millions and visitors to https://bastacasinonutanlicens.com/casino-bonus-utan-insattning/ can also anticipate a satisfying cash prize.

There were five Portuguese on the field at the Emirates stadium: full-backs Cédric Soares and Nuno Tavares for Arsenal and Diogo Dalot, Bruno Fernandes and the returning Ronaldo for United. The home side offered a classy gesture in response of Ronaldo’s recent loss of his baby son by standing and clapping in the 7th minute to pay their respects.

United started the match in predictably sloppy fashion and Arsenal took the lead after just two minutes. Summer arrival from Benfica Nuno Tavares beat countryman Dalot to a rebound at the back post after David de Gea had saved from Bukayo Saka, with Tavares prodding the ball in for his first goal for the club.

💥 First goal for The Arsenal

😂 Followed by a perfect celebration

There was an improved response from United, who have faced arguably more criticism in recent weeks than any time since before the Alex Ferguson era. Ronaldo impressed from the first kick, demonstrating a good touch and sharp passing to lead his side, while Fernandes spurned a good chance to level.

There was also a controversial moment involving former Sporting right-back Cédric, whose hand stopped the ball inside the box when defending against Jadon Sancho, but referee Craig Pawson decided the act did not warrant a penalty. United’s frustrations were compounded shortly after when Saka drew a foul from ex-Porto man Alex Telles and then converted from the spot on 32 minutes to give Arsenal a dream two-goal lead.

With United reeling, it came as no surprise that Ronaldo was the man to respond. Within a couple of minutes of Saka’s goal, the United striker brilliantly swept home a cross from Nemanja Matic to halve the deficit. There was still time for Dalot to rattle the crossbar from distance before the teams went into the break with the hosts 2-1 up.

🅰 A closer look at the past and present Reds who have contributed to @Cristiano's #PL century...#MUFC

Arguably the game’s crucial moment arrived ten minutes after the re-start. Tavares, who had an unsure afternoon from a defensive point of view after his goal, inexplicably handled the ball in his own box from a corner to give United the chance to draw level. Fernandes took the responsibility, surprising many given Ronaldo’s form, and after his traditional jump in the run-up stroked his shot too wide and the ball struck the outside of the post.

United continued to press and Portuguese players continued to take the focus. Ronaldo had the ball in the net again but was flagged offside – much to the anger of United boss Ralf Rangnick – and Dalot again struck the woodwork as his effort was pushed onto the post by Aaron Ramsdale. Instead it was Arsenal who got the all-important fourth goal of the game, with Granit Xhaka beating De Gea with a brilliant long-range shot.

United left the game aggrieved about VAR decisions – including a claim for offside for Xhaka’s goal – but the Red Devils find themselves short of sympathy at present given their lacklustre form. Arsenal, meanwhile, have beaten United and Chelsea in the space of a few days and coach Mikel Arteta was asked about young Portuguese Tavares after the match.

“We have to help him,” Arteta said, with sections of the Gunners crowd critical of the defender. “He needs to go through these experiences to understand, OK what triggered that moment, when you go from here to there – and give him support.

‘We know, I’ve said this many times, the bill that you have to pay with these players is that they have never experienced this. So they are going to make mistakes, and they are going to make decisions that – from here it’s very easy to say “why have you done that?” – but they are there on the pitch, and let’s give them support because they need it.”

United are set to miss out on Champions League football – an unfathomable prospect at the start of the season as many at Old Trafford anticipated a title challenge – but interim boss Rangnick still had words of praise for Ronaldo, who once again rose to a level sadly lacking amongst his teammates.

“Why is he the player he is? Because he’s always been a top professional,” said Rangnick. “Always trying to improve his performance, always looking after himself and his body. And always the first to come and the last to leave the training ground. This is why he’s still able to play at the age of 37 in the most competitive league.”

Portuguese players defying the ageing process is a common theme in football of late, and in Poland 37-year-old striker Flávio Paixão reached a landmark with Lechia Gdansk. Paixão’s brace in a 2-0 home win over Warta Poznan not only gave his team victory, but meant he became the first foreign player to score 100 goals in the Polish top flight.

Paixão’s first was a smart turn and finish inside the box in the 5th minute, while the second followed 12 minutes later from the penalty spot. The goals take him on to 9 for the season in the Ekstraklasa as he aims to hit double figures for the sixth season in a row, but the wider context of his performance was the talk of post-match coverage.

“An amazing moment for me,” Paixão said on the pitch after being congratulated. “I am written in the history of Ekstraklasa. I am the first foreigner to score a hundred goals. This moment is once in a lifetime. Now my name has been registered in Poland, in Ekstraklasa and it is really amazing.

“Before the game, I felt that today will be “the match”. We really had many chances. Before the game, I said that I would score a hat-trick today and I almost made it. I never think about the goal itself, but about the joy, the celebration after it. I am mentally focused, I visualise goals often and it helps.

“They also told me that whoever scores the first goal today will be Lechia's 1000th goal. Today I scored everything - the 1,000th goal for Lechia and my 100th goal.

“Motivation? I'm 37 years old, I'm about to turn 38. I don't need any motivation. In my mind, in my way of thinking, in discipline, in faith. When you are this old, you have a lot of experience and you know what life is like.”

Jota and Celtic closing on title

Celtic took another step towards reclaiming the Scottish Premiership this weekend with a 2-0 win at Ross County, and Portuguese forward Jota was the catalyst for the victory with a goal and an assist. The triumph means that the Hoops are six points clear of fierce rivals Rangers with four matches left to play, beginning with an Old Firm derby between the two next week.

It was considered something of a risk Jota moving to Scottish football, many believing the former Benfica man was too lightweight, but the gamble has certainly paid off. No risk, no gain, the saying goes, and the same applies to players trying out https://bastacasinonutanlicens.com/casino-bonus-utan-omsattningskrav/ with instant cash winnings on offer.

The first goal at Dingwall on Sunday came on 17 minutes, with Jota receiving possession on the right before delivering a cross which was headed in by Japanese forward Kyogo Furuhashi. Celtic had to wait until three minutes from time to seal the win – Jota finding himself on-hand to score from close range and send the significant away support into a frenzy as title success draws nearer.

Speaking after the match, Jota was quick to shut down any questions about his future, having yet to resolve the issue of whether he will stay in Glasgow or head back to Benfica. “No, not a chance [I will speak about it] I’m just enjoying day by day,” he said. “It has been a terrific season for me so I am just enjoying getting to know the people around me. Be a better person, be a better football player, I am learning every day with quality people.

“So that’s what I’m doing now. I don’t have to talk about that, I just want to enjoy and give everything for this shirt. As a football player, you need to keep your mind on the pitch that is all that matters. Contract things are for other times, so let me just play football and enjoy it.

“As football players we need to keep our minds on the pitch and that’s all that matters. Bureaucratic things are for another time. So let me just play football.”

João Amaral has been one of the standout performers in the Polish Ekstraklasa this season, and the Portuguese scored this weekend as Lech Poznan maintained their title challenge with a 3-1 win over Stal Mielec. Lech surprisingly fell behind in the second minute, but Amaral scored with a left-footed finish in the 12th minute to settle the nerves ahead of a home victory to keep them level on points with Rakow Czestochowa at the top.

Notts County are still on-course for a play-off place in the National League in England thanks to a 3-1 win over Weymouth, in which Ruben Rodrigues scored his 16th league goal of the season with a superb free-kick. In Turkey, on-loan Benfica man Chiquinho scored a penalty for Giresunspor in their 3-1 Super Lig defeat to Fatih Karagumruk.

Finally, there was a Portuguese goal-fest in the United Arab Emirates’ Arabian Gulf League, led by former Seleção man Adrien Silva. The ex-Sporting midfielder scored in Al Wahda’s 3-2 win over Al Dhafra, in a match which was decided by a 94th-minute winner from Portugal U19 international defender Rúben Canedo. Elsewhere, Tozé scored a penalty as Al Nasr drew 2-2 with Kalba, and former Portimonense forward Aylton Boa Morte scored in Khorfakkan’s 4-2 defeat to Ajman.