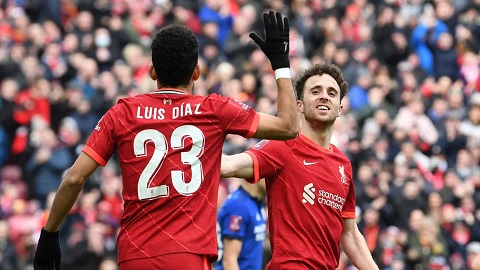 Ask anyone in football how respected Portugal is as a soccer nation, and the answers will be glowing. A nation of around 10 million people, Portugal could be arguably the best pound-for-pound football nation in the world.

The gluttony of coaches and players that have come out of that country in the last three decades has been incredible to watch over the years. It is therefore somewhat surprising that one club that has often had little to do with Portuguese football has been Liverpool FC.

However, since the rise of Pepjin Ljinders into the first-team coaching staff, things have changed. Ljinders spent time at FC Porto as a development coach, and has a rich and endearing passion for the Portuguese game. It is believed that he, along with the scouting staff, have been passionate advocates for Portuguese-adjacent signings at the club. This also included the arrival of Vitor Matos, also from FCP, as part of the coaching program at the club.

Among the first signings to arrive from the Portuguese game, then, was that of Diogo Jota. Indeed, the former Wolverhampton Wanderers and Porto player had enjoyed an excellent spell in the Midlands before coming to Liverpool. This season, the forward has hit a hugely impressive 23 goals so far whilst contributing 5 more assists. In terms of overall form and contribution, he has been an essential part of the Reds rise to potential quadruple contention.

The success of Jota, though, has seen other signings considered. And it is not only players of Portuguese nationality, but those who play in the Liga NOS. The latest example is that of Luis Diaz, who has become a livewire option from the start or off the bench for the Reds. Alongside Jota, Diaz has re-energised the Anfield side in attack.

Throw in the growing number of Portuguese speakers at the club thanks to the presence of several Brazilians, too, and it is easy to see why Portuguese football and Liverpool seem like such a natural fit.

A few big names have been linked with Liverpool in recent times, especially in central midfield. One name that has popped up continuously in the last 18 months has been that of Renato Sanches. The former Benfica prodigy was a huge hit back home, but struggled badly in his spell in Germany with FC Bayern. A series of ill-advised loans followed, including time in the Premier League with Swansea City. The current net worth of the Portuguese is €30.00m.

Things have worked out much better since he moved to the French Ligue 1, though, winning the title last year with Lille OSC. Expected to leave LOSC this summer, though, Sanches has been again noted as a Reds target. The Merseyside giants want to add another midfielder in the summer, someone to help add further competition to an area of the team that feels a little lightweight.

The contributions of the likes of Alex Oxlade-Chamberlain and Naby Keita have often failed to be consistent. Young talent like Curtis Jones and Harvey Elliott are still not at the stage where they could start each week.

As such, the arrival of Sanches – or another Portuguese player – could be something we see in the summer. Having rarely looked at Portuguese football in his previous positions, Jurgen Klopp now seems keen to keep adding from what is one of the best-value leagues in Europe, and one that Klopp himself has gone out of his way to praise.