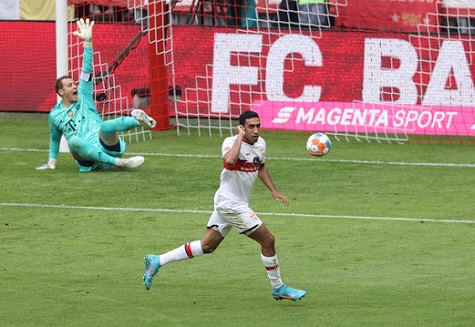 Portugal’s Bundesliga contingent were in fine form on Sunday afternoon, with three of the day’s matches in Germany containing Luso goalscorers. Leading the way was Tiago Tomás, who scored a superb early goal for VFB Stuttgart in their impressive 2-2 draw at champions Bayern Munich.

Elsewhere, Gonçalo Paciência broke his recent goalscoring drought in stunning fashion with a long-range strike as he looks to find form for Eintracht Frankfurt ahead of the Europa League final. André Silva was also on the mark in style for RB Leipzig, who remain in the battle for a top four place.

Stuttgart’s fight to stay in the Bundesliga has taken some setbacks of late. Die Roten are without a win since mid-March and currently occupy 16th place, which would see them headed for a play-off against the third-best side in the second tier. This weekend’s trip to Bayern Munich offered little hope of ending their winless run, but a surprise 2-2 draw feels a bonus point for Stuttgart.

A significant influence on Stuttgart earning a draw was a fantastic opener by Portuguese youngster Tiago Tomás in the 8th minute. The visitors counter attacked down the right flank and Omar Marmoush’s cutback found Tomas on the edge of the area for the 19-year-old to sweep a brilliant finish into the roof of the net.

Bayern responded through Serge Gnabry and Thomas Muller to lead 2-1 at the break, but Sasa Kalajdzic’s equaliser early in the second half proved the last goal and Stuttgart left with an unexpected point. With one match remaining Stuttgart could still finish clear of the drop-zone, but they could also drift into the automatic relegation places or remain set for a play-off.

A topsy-turvy 2-2 draw between @FCBayernEN and @VfB_int, with Sasa Kalajdzic earning the visitors what could be a crucial point in their battle for #Bundesliga survival! 💪#FCBVFB pic.twitter.com/XZV4jYFUM2

Paciência in contention for final role after golaço

Eintracht Frankfurt have nothing to play for domestically, having endured a massively disappointing league season which sees them in 12th place. However, victory over West Ham United in the Europa League semi-finals means Eintracht will be favourites heading into the continental showpiece final against Rangers of Scotland later this month.

Hoping to play a part in the final is Portuguese striker Gonçalo Paciência, who has struggled for minutes this season. The former Porto man was given a rare start on Sunday as Eintracht hosted Borussia Monchengladbach, and Paciência responded with a truly memorable goal when he dispatched a thunderous shot from long-range which fizzed past Tobias Sippel and into the roof of the Gladbach goal.

What a strike by Gonçalo Paciência!
pic.twitter.com/vJsEMZK4jz

“I scored a nice goal, that’s always important for a striker and gives you confidence,” Paciência said after the match. “It’s a great feeling, also because I haven’t scored in a long time. I know I have a good shot. My mother said this week that I need to shoot more from outside the box. Nice that it worked today. I always give everything for Eintracht and am always there for the team. Of course, we can play better than we did today.”

Eintracht travel to Mainz on the final matchday next weekend, but all eyes will be on the Europa League final against Rangers four days later on Wednesday 18th May at Estadio Ramón Sánchez Pizjuán in Seville.

RB Leipzig will have their top four hopes in their own hands on the final day after André Silva scored in a 4-0 win over Augsburg to keep them in 4th place. Leipzig have had a miserable couple of weeks, with back-to-back defeats in the Bundesliga jeopardising their Champions League hopes and a crushing defeat to Rangers which cost them their place in the Europa League final.

Portuguese international Silva has had a mixed first season with the club following a high-profile switch from Eintracht Frankfurt last summer. Having struck 28 goals for Eintracht last season, the former Porto man has found himself in and out of the line up at times in Leipzig and this weekend’s goal put him on 11 league strikes for the campaign.

“I feel good, as do the whole team,” Silva said. “We’ve had a couple of bad games over the past couple of weeks but today we could enjoy ourselves, which is reflected in the performance and the goals. Defeats also make you stronger. We have so much quality in the team and we can be dangerous in many ways.”