Which Portuguese players abroad will feature in domestic title-winning teams this season? 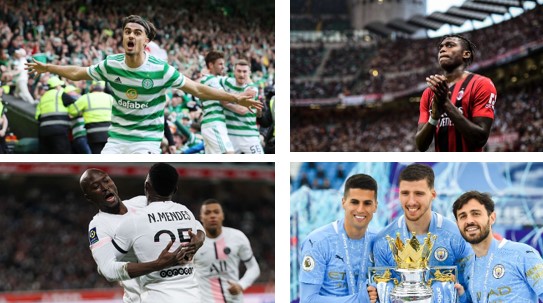 As domestic leagues across Europe reach their conclusion, fans of Portuguese players and the national team are taking an interest in which Seleção stars will be celebrating domestic championship titles this season.

In many cases, fans will also have a gambling interest in the way things turn out. This applies not only in Portugal, but in other geographical gambling and betting areas where there is a strong interest in Portuguese footballers and coaches such as the Brazilian market that is explained in more depth there.

So, what can those following the fortunes of Portuguese players in Europe expect at the end of the domestic season in terms of winners’ medals? Here is a run-down of the players who already have achieved success in their league or are on the brink of doing so.

Danilo Pereira left Porto for Paris with a strong reputation as a defensive midfielder. But at Danilo has this season also added goal-scoring to his array of talents as Paris Saint-Germain romped to another Ligue 1 championship triumph. The Portuguese midfielder has netted 5 goals in 26 league appearances so far.

Compatriot Nuno Mendes has also been a big hit at the Parc des Princes. Still a teenager, the former Sporting defender has played a total of 36 games for the French champions in 2021/22 and has widely been considered the club’s most successful transfer brought in last summer… eclipsing a certain Argentine star.

Four top Portuguese players are currently in with a chance of being part of an English Premier League (EPL) winning team this season.

Three of them play for current EPL champions Manchester City: attacking midfielder Bernardo Silva, roving full-back João Cancelo, and center-back Rúben Dias. The trio are fixtures in arguably the best club team in the world (despite failure again in the Champions League), and are expected to play key roles for Portugal at the Qatar World Cup later this year.

Given the 5-1 hammering administered to Wolves yesterday, on the back of the 5-0 victory against Newcastle at the weekend, City seem set on clinching what would be a 4th league title in 5 years.

Should City fall short, a fourth Portuguese player competing at the top of the EPL will be one of the beneficiaries. Diogo Jota has enjoyed a fabulous season for Liverpool as the Merseyside club continue their quest for an unprecedented quadruple of trophies. Adding the Champions League and FA Cup to their League Cup triumph earlier in the season is very much on the cards, but winning the league now seems a tall order after the reds dropped two points in their recent 1-1 draw with Tottenham, meaning Manchester City are three points ahead with three matches remaining.

Nevertheless, Jota will be keen to add to his 21 goals this season as he and his teammates attempt to keep the pressure on City right until the final whistle of the final game of the season.

In Italy’s Serie A, Portuguese winger Rafael Leão is embroiled in one of the most exciting title races on the continent. They are currently two points ahead of current champions Inter at the top of Serie A with two games left to play.

Leão has enjoyed a superb season and played a key role in Milan’s performance this time out. The 22-year-old has accumulated 17 goal contributions (10 goals and 7 assists) and many Portuguese fans and experts alike are calling for his integration into Portugal’s starting XI ahead of the World Cup.

Winger João Pedro Neves Filipe, known as Jota, raised eyebrows by opting for a move to Celtic in the Scottish Premiership. On loan from Benfica, the move has been a resounding success and The Hoops are extremely keen to sign the 23-year-old on a permanent basis. Hardly surprising given his 20 goal contributions (9 goals, 11 assists) in a debut season in the middle of which he was out for several weeks due to injury.

It remains to be seen if Jota decides he wants to stay in Glasgow, but he certainly has good reason to. Celtic clinched the Scottish Premiership title last night with a 1-1 draw at Dundee United, given them a lead eternal rivals Rangers cannot pull back. Jota will proudly sport his domestic league winners medal when Celtic play their final league game at Parkhead on Saturday in what will be a party atmosphere.

The play-off stages of the Super League Greece are still ongoing, but a comeback 2-1 win against PAOK a week ago gave the team coached by Portuguese manager Pedro Martins an unassailable lead.

As well as Martins and the rest of the Portuguese coaching staff, Olympiacos this season fielded two Portuguese attacking midfielders in João Carvalho and Marcos Paulo Mesquita Lopes, known in the football world as “Rony”, both of whom played their part in a third consecutive title conquest.

guest
This comment was minimized by the moderator on the site

Fraudiola is in charge, that's how. The worst, most over-hyped loser ever to manage in Futbol.