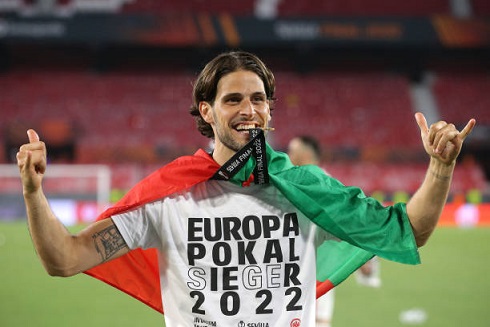 The German side scored all five of their spot kicks at the Ramon Sanchez Pizjuan in Sevilla to claim a 5-4 win in the decider, with the teams having played out a 1-1 draw in front of a vibrant crowd in Spain. While the Frankfurt hero of the night was Colombian striker Rafael Borre, who scored his team’s equaliser as well as the winning penalty, for Portuguese forward Gonçalo Paciência the trophy carried a particularly special meaning.

Paciência scored twice during the group stage, but has been a peripheral figure during the knockout stages of Eintracht’s European campaign. The 27-year-old watched the entirety of the night’s action from the substitutes bench without being called, but when speaking to Portuguese reporters after the match showed little sign of disappointment as his team celebrated glory.

“It’s fantastic, it’s probably the best moment of my career so far,” Paciência told SportTV. “It’s a team that is special to me. I don’t have many words, it’s amazing.

“This club is a different club, not only because of the fans, but also because of the mentality they have inside the club, it’s an incredible atmosphere. Within the team, in the city, the fans. It’s a perfect blend that I haven’t seen for a long time and it’s actually incredible to wake up every morning and go to training with all these players in a diversity of cultures: France, Portugal, Brazil, Colombia... It’s incredible. This club has something special.

“We all had our moments, I didn’t play as much as I wanted, but I had important moments, in the Europa League and in the championship and I feel important, one of them. I think that throughout the season there were several players scoring, defending, playing well and that makes the team grow in everything. I didn’t play [tonight] but I wanted to win the cup, this medal.” 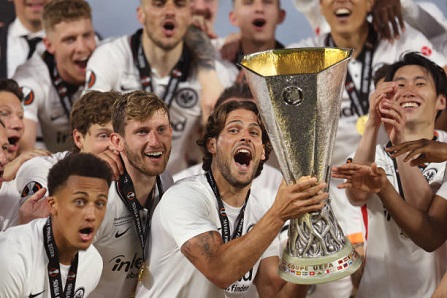 The medal is one which eluded Gonçalo’s father, Domingos Paciência, who having won numerous domestic trophies with Porto had the opportunity to add continental glory as a manager. Domingos’ Sporting Braga side were beaten 1-0 by FC Porto in the all-Portuguese Europa League final in Dublin back in 2011.

“Inevitably [I dedicate it] to my father,” Gonçalo said. “It is the trophy he’s missing. For everything he goes through with me and for me, for him it is beautiful. It is the trophy that is missing in his career, as a coach and player and he is perfect at home now, we have all the national and international titles. The family goes through a lot over the years. My mother, who suffered for years and years with football, my brothers who are at home watching… fantastic.”

Quiz question: Gonçalo Paciência became the 15th Portuguese player or manager to win the Europa League/UEFA Cup for a club outside Portugal. How many of the other 14 can you name?