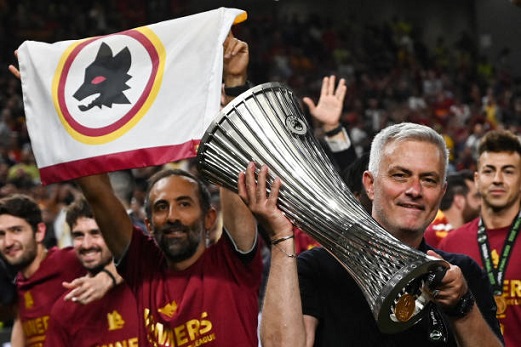 Roma beat Dutch side Feyenoord thanks to Nicolo Zaniolo’s first-half goal in the Albanian capital, giving Mourinho the fifth European trophy of his career and Roma’s first continental success in over 60 years.

Forward Zaniolo, who struck a memorable hat-trick in the quarter finals against Bodo/Glimt, proved the hero by grabbing the winner in the 32nd minute when he superbly controlled Gianluca Mancini’s pass before prodding the ball past Dutch goalkeeper Justin Bijlow.

Roma held off plenty of Feyenoord pressure in the second half to protect their lead, particularly in the early stages after the re-start when Portugal No1 Rui Patrício made two fine saves. Patrício was joined in the Roma line-up by midfielder Sérgio Oliveira, with both players winning the first continental club trophies of their careers in their debut season.

“There are so many things going through my head. So many things at the same time,” an emotional Mourinho told Sky Sport Italia after the match.

“I’ve been at Roma for 11 months, I realised the moment I arrived what it meant, they were waiting for this. As I told the lads in the locker room in Turin, we did what we needed to do, qualify for the Europa League. We had great work all season. This was not work tonight, this was history. We had to write history. We wrote it.

“The great thing about my career is that, aside from the Europa League with Manchester United, doing it with Porto, Inter and Roma is very, very, very special. It’s one thing to win when everyone expects it, when you made the investments to win, but it’s quite another to win when something remains immortal, that feels truly special. I think of myself, of course, but above all the Roma fans who can celebrate tonight, enjoy themselves and remember this night forever.

“Now I am staying, there are no doubts. Even if some rumours emerge, I only want to remain at Roma. We must understand what our owners, who are fantastic people, want to do next season, because this is history, but we can build a really strong project with honest professionals. We need to sit down and understand what the plan is for next season.

“This remains in the history of Roma, but also mine, I was told only I, Sir Alex and Giovanni Trapattoni won trophies in three different decades. It makes me feel a little old, but it’s nice for my career!

“Now I will go on vacation and sit on the beach to think about all this for a while.”

Dr.Cajetan Coelho
This comment was minimized by the moderator on the site

Senhor José Mourinho has done it in style. He has won five European trophies. His best is yet to come. Congrats.

Mou once again proves everyone wrong! Managed to win Europa league with half a club. Next season with some key reinforcements Roma might challenge for champions league spot then who knows....