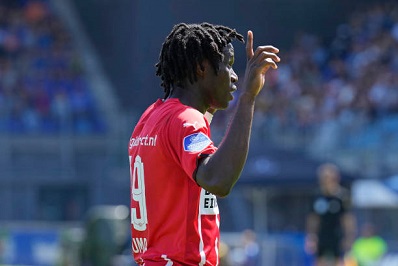 Portugal international forward Bruma is set to return to Turkish football to join Jorge Jesus’ Fenerbahce, after the Istanbul club confirmed a deal to take him on loan from PSV Eindhoven.

Bruma, who has switched clubs many times during his career, enjoyed arguably his best form with Galatasaray in Turkey during the 2016-17 season, where he scored an impressive eleven goals in the Super Lig.

The former Sporting man’s exploits with Gala led to a move to German side RB Leipzig, where Bruma showed flashes of his talent but ultimately left for PSV after falling out of favour. A good start in Dutch football did not last and a mid-season loan to Olympiacos in Greece last season saw Bruma again find form under Pedro Martins.

PSV made the 27-year-old available this summer and Jorge Jesus quickly identified Bruma as part of his plans for Fenerbahce. Jesus took charge of the club on a one-year deal earlier this month and has already been backed in the transfer market, with Brazilian midfielder Lincoln also arriving from Santa Clara and a deal for Jesus’ former striker Bruno Henrique of Flamengo thought to be close.

Fenerbahce will be the 7th club Bruma has turned out for since leaving Sporting almost nine years ago, having earned a promising reputation as a pacey and highly skillful prospect. With nine caps for the Seleção, the winger has not featured for Fernando Santos’ side since taking part in Portugal’s 6-0 win over Lithuania in November 2019 at Estádio Do Algarve.

Bruma, another cautionary tale of what happens when your ego is larger than your work ethic.