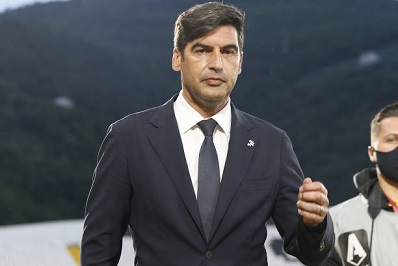 Paulo Fonseca has made his return to football after a little over a year out of the game by signing a contract with French Ligue 1 side Lille.

Former Porto boss Fonseca has been without a club since leaving Roma at the end of last season. The Portuguese has signed a two-year contract with Lille, who won the French championship last May at the end of the 2020-21 season.

“Becoming the new coach of LOSC is a source of pride and a great honour for me.” Fonseca said. “I am aware that having been chosen to join this great French club, with its rich history and impressive track record, also gives me a great responsibility. I am therefore happy to begin this adventure with LOSC and eager to get to work with the staff and the players.

“Above all, I am extremely motivated and determined to ensure that together, collectively, we will achieve the objectives set and take the club and the group to the highest level. I thank the leaders of LOSC for their confidence. I am also looking forward to meeting the Lille supporters in this magnificent stadium, and thank them already for their warm welcome. Allez les Dogues!”

Lille have made much of Fonseca’s reputation for an attractive style of play, describing their new coach as a “football aesthete” on their social media. The French Flanders club have a strong recent tradition of Portuguese involvement, with José Fonte currently serving as club captain and Renato Sanches, Tiago Djaló and Xeka on the books, while Rafael Leão was a high-profile figure at Lille ahead of joining AC Milan in 2019.

…and unfortunately not available for the Seleção anymore.

Rolf Gerber
There are no comments posted here yet