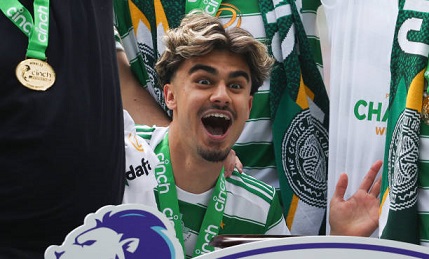 Portuguese forward Jota has completed his highly-anticipated move from Benfica to Scottish champions Celtic, after a successful season on-loan in Glasgow last term.

Jota was named in the PFA Scotland Team of the Year as Celtic won the Scottish Premiership and Scottish League Cup double. The 23-year-old scored 13 goals in all competitions and was a major creative influence for Ange Postecoglou’s side, having joined on a 12-month loan from Benfica last summer.

Celtic have not disclosed the fee for Jota, but Portuguese sources had long suggested that it would cost around €7.5m to make the deal permanent. Jota has signed a five-year contract at Celtic Park, tying him to the club until 2027.

“I’m feeling great, it’s a tremendous step in my career,” he said. “I’m really happy to have joined Celtic and I just want to give some joy to the fans, to our team and conquer as many things as we can.'

“It was a great experience last season. I already knew, more or less, how big Celtic was but I think people only realise once you are inside the club and inside the structure.

“With the season that we had with all the winning and all the trophies, I think it was very good for everyone, and I just got to know the club in another perspective, and I just fell in love. So I think it’s a good time to be here and I just want to develop.

✨✍️ #JotaAnnounced! #CelticFC is 𝙙𝙚𝙡𝙞𝙜𝙝𝙩𝙚𝙙 to announce the permanent signing of Jota from Benfica.

“I think that the club speaks for itself and the experience that I had last season made it an easy choice to make. Throughout the season I felt at home and I thought it would be the right place to develop so I thought, let's do it'.

“Now I must go to training and try and get better every day – that’s my mentality. I know I can get better and I’m excited to see what I can achieve as well. I try to do my thing on the pitch, which is why I’m here, and what I can promise is that I’ll fight every day to honour the club and to fight for things.

“Every day I will try and be a better person and player because we want to achieve a lot of things which is why I’m here.”

DanDaSilva
This comment was minimized by the moderator on the site

John
There are no comments posted here yet