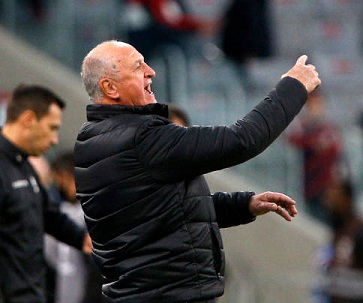 There was a warm embrace between the two managers before the game, after which Athletico caused a surprised thanks to goals from 17-year-old forward Vitor Roque (38’) and Vitor Bueno, who scored from the spot just before the hour mark. It was Palmeiras’ first league loss since the opening day, but Abel was highly gracious in defeat when discussing his vastly-experienced opposite number.

“If the world had more people like [Scolari], it would be much better,” Abel began. “The first hug [before the game] was one of gratitude, first as a player, because I was his player, and second as a coach. He was the last coach [to be] champion of the World for Brazil. He's 73 and I'm 43, I have a lot to learn from him.

"He is a coach who knows Brazilian football, he knows how to win. I have a lot of gratitude as a player, coach and as a Portuguese. He was a person who changed mentalities in Portugal when it comes to cheering for the Seleção and when it comes to our little flag, when he made all the Portuguese people put one in their homes to support. The [second] hug was gratitude and to congratulate him.”

Palmeiras remain top of the standings despite the defeat, with Scolari’s Athletico two points behind after 15 matches. Defending champions Atletico Mineiro are in 3rd on the same points as Athletico, while Vítor Pereira’s Corinthians are in 4th place just three points off the leaders.