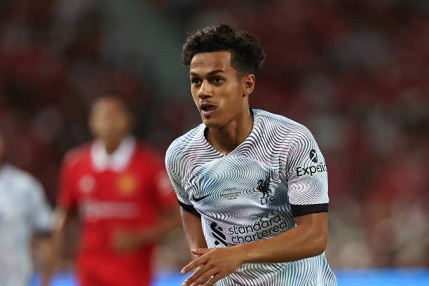 Portugal U21 international Fábio Carvalho has only just arrived at English club Liverpool, yet the midfielder has already been a frequent recipient of praise from his new boss Jurgen Klopp. The positive early impressions of Carvalho at Anfield represent another step in what has been a whirlwind 12 months for the youngster.

Carvalho’s road to Merseyside has been far from simple. To gain a greater understanding of the story behind one of Portugal’s brightest emerging talents, we take a look back at Carvalho’s childhood, including insights from his father and coaches both in Portugal and England.

Maisfutebol spoke to Victor Carvalho, an Angolan-born Portuguese who has been an instrumental figure for Fábio. Victor, who plied his trade as a plumber at home and abroad, returned to Portugal from a stint in France shortly after Fabio’s birth in Torres Vedras, and the family soon moved to the humbler surroundings of the notoriously rundown neighbourhood of Zona J, Chelas, in Lisbon.

Fábio’s love for football was evident early on, with his father recalling the youngest of his two sons’ obsession with following his older brother out to play in nearby fields alongside older children when he was just four years old. “He would disappear from the house and we always knew where he was,” Victor says. “The neighbourhood has very good kids, despite what they say. And the good kids just want to play football. Fábio was always there, and he always got along well with the older boys.

“But the neighbours more than once came to warn me that they saw the (4-year-old) kid crossing the main road to go play football with his brother. ‘Mr Victor, Fábio has crossed the road again, he was nearly run over by a truck.’ It was scary.”

The youngster’s pursuit of football alongside his brother, who is three years older, eventually took him to the football pitches of Olivais Sul, where he was spotted by a scout from Benfica. Academy coach Igor Santos remembers Fábio’s integration at Petizes do Benfica, where he quickly displayed some unique qualities.

“Fábio arrived at Benfica at the age of seven after someone saw him at a game at Olivais Sul, where he played for his brother's team, with kids two or three years older than him,” Santos told Maisfutebol. “They noticed a kid smaller than the others, but very talented.

“He was a quiet and introverted kid, but what I remember most about him is that he was always very attentive to what we were saying, and he learned everything very quickly. On the field, he was very competitive. He was a fast player with excellent dribbling ability and a competitive attitude. He stood out a lot in the attacking phase.

“He was from Zona J, from Chelas. While other kids went on vacation in the summer, he spent those three months playing football in the neighbourhood. Probably playing against older kids, because in these games there are no age limits. And in the three years that we trained him, we realised that he arrived at the beginning of the season, in September, with much more progress than most of his teammates.

“Street football was noticeable in the way he played, in the ease of one-on-one, for example. Fábio played a very wild football, that side of street football made him very creative.”

Things changed for the family in 2013 when a desperate economic situation in Portugal led Victor Carvalho to decide on moving again in search of work. “I knew that in London I would have no difficulty finding a job in my sector, as I had already worked there. At first it was just me, then after three months I was able to send for the rest of the family to join me.” 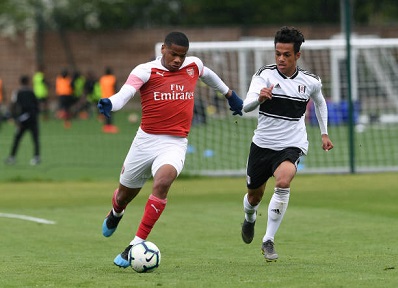 The move meant Fábio would leave Benfica, although according to Carvalho senior the decision was made easier by Benfica’s cost-cutting regarding young players. “When he went to Benfica, what we asked was that they provide transport for him. Because he had school, and that was also important. Mr Miguel Soares and Mr Fonte Santa, whom I can only thank, took care of everything and for three years he had transport. But then someone ended it.

“With me being in England, his mother explained to him that it was exceedingly difficult for him to continue playing at Benfica, because she could not take him to training and games and the club no longer guaranteed him transport. That is why it was not as much of a loss for him to come to England. Moving to England was the best decision I made in my life to guarantee the future of my children.”

“He has the x factor”

The adaptation to south London for Fábio and his brother and sister was so easy that when their parents considered a move back to Portugal, it was the children who insisted on staying put. Fábio inevitably found himself playing football in his new surroundings and, despite an unsuccessful initial trial at Fulham, it was while playing for Balham FC that the youngster began to develop a reputation.

“Fábio was 10 years old and appeared in a training session of our under-11s on Clapham Common,” Balham’s coach Greg Cruttwell told Sky Sports earlier this year. “They explained that they had recently moved to London and were looking for a club for him to play for.

“We let him join in a training session and it was immediately apparent that he was something pretty special. After 30 seconds of training, we threw a ball at him from 25 meters, and he pinged it back it with ease. I looked at my colleague and there was no need to say anything.

“He had an incredible session. He had poise, balance, technical quality and not only that – he was a really nice kid. We spoke to his mum afterwards invited him back, signed and he was here for three years before the inevitable happened and all the clubs came calling.

“Chelsea, Arsenal. Manchester United flew down to meet me in a portacabin in a secondary school in Balham to talk about him. Everyone came calling. I wasn’t surprised because the great thing about Fábio is not only did he have swagger and something special about him as a player, but he also had it as a person. The kid has the x factor.

“While on his way to stardom at Fulham, he still came to our stadium from time to time to watch Balham games. He really is an incredible kid.” 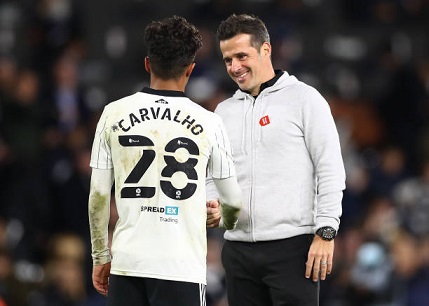 Like his father, Fábio’s mother spoke little English during the first few years in London and the family asked Balham to assist in his next move, with numerous clubs keen on winning the race for the soon-to-be teenager’s signature.

“With Chelsea alone, we had nine meetings,” Victor Carvalho reveals. “We went to the training centre several times. But we also met with Arsenal, Manchester United, Liverpool… until Fulham appeared.

“Chelsea told us that they could not guarantee help with schooling and transport for Fábio. And Fulham demonstrated a willingness to take care of it. Above all, we were not just looking for the sporty side and Fulham offered the best conditions in that aspect and still paid the kid 300 pounds a month.”

Carvalho rose through the ranks at Craven Cottage and signed his first professional contract in the summer of 2020. The two-year deal would prove somewhat costly for Fulham, as the midfielder’s rapid progress saw him enter the second year of his contract with many of the biggest clubs in the country enquiring about his availability.

Carvalho opted against signing an extension last summer and his departure for a bigger club became inevitable. Nevertheless, Carvalho senior is full of praise for the way in which Portuguese boss Marco Silva has managed his son as Fulham secured promotion to the Premier League.

“When Marco Silva arrived, Fábio had already refused to sign a new contract with Fulham,” Victor says. “When that is the case, there's always pressure to leave the player out, but Marco did not do it.

“He spoke to my son and told him that as far as he was concerned, Fábio would play because he was important for the team. Honestly, in addition to doing a good job, Marco Silva has been a good adviser.”

Finally, as Fabio settles into life at Liverpool, where Jurgen Klopp has already described him as “pure joy” to watch, many in Portugal had wondered if there was a dilemma over an international career. Carvalho played for England at youth level, but his decision to join up with Portugal’s U21 squad in March was a clear indication of his intent.

“Fábio is the son of an Angolan father and a Madeiran mother - he was born in Portugal and is Portuguese,” Victor emphasised. “Right now, he does not even have an English passport. He wants the Portuguese national team - that has always been his dream.”

Carlos
This comment was minimized by the moderator on the site

Fantastic article. This kid cost nothing compared with Darwin Nunez but he will be a bigger success at Liverpool I garantee you.

His style of play is more like Renato Sanchez's. I hope he gets the opportunity to play regularly at Liverpool and show his talent to the world.

guest
This comment was minimized by the moderator on the site

He belongs on the national team for this upcoming World Cup. He is in exactly the same position C Ronaldo was in the 2000 Euro, just that this kid has not had that extra year of eyes on him from the general population.

He belongs on the national team for this upcoming World Cup. He is in exactly the same position C Ronaldo was in the 2000 Euro, just that this kid has not had that extra year of eyes on him from the general population.

This is a star player. He has every gift Ronaldo, Messi or Zidane has, just not the time and space to execute on it.

No player on the Portugal roster has the potential to stir the pot like this kid. Remember how good Pedri was for Spain just a few months ago.

There is no way he can reasonably be left off with fringe players on the squad that will likely not play such as M Nunes.

Read More
guest
There are no comments posted here yet