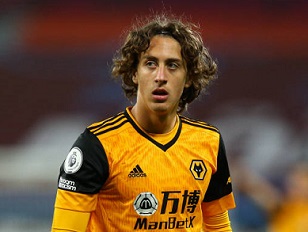 Portuguese youngster Fábio Silva has wasted little time making himself a hero at new club Anderlecht, after scoring just minutes after entering the action on his debut at the weekend.

Silva, who arrived in Belgium on a season-long loan from Wolverhampton Wanderers last week, came on with around ten minutes left to play as his new side led KV Oostende 1-0 on Sunday. Silva put the seal on the win with a brilliantly-taken goal two minutes from time, sending the home fans at Lotto Park into raptures at seeing their new signing make an impact.

“It was too easy for me,” Silva joked in his post-match interview. “But more seriously, in these moments you need to keep a cool head and stay in the game. You have to wait for the next opportunity. The fans chanting my name? That’s why you become a footballer. When the fans sing your name it’s the most beautiful feeling in the world. You feel the appreciation from the fans and I’m grateful to them.”

Anderlecht are expected to rely on a young forward line this season, with fellow 20-year-old Sebastiano Esposito on a similar loan deal from Internazionale. Silva replaced Esposito on Sunday but the Italian was one of the first to offer his congratulations and the pair look set to build on a good relationship this season.

“We know each other well and we joke a lot,” Silva said. “I’ve known him since we played each other regularly for our national youth teams. We understand each other well on the pitch and that is important. I also know Joshua Zirkzee [who played here last year] and I messaged him before coming.”

Silva’s goalscoring start in Brussels has caused quite the stir at the club. Anderlecht declared that observers should ‘remember the name’ when posting a video of the strike and much of the club’s social media attention has focused on their new no.99 in the days since.

Fabio has a long way to go. He should had stayed and played in Portugal for at least 3 years before making the jump to another team or league. That is why the Wolves put him on loan. Congrats on scoring in Belgium but there will be a lot...

Fabio has a long way to go. He should had stayed and played in Portugal for at least 3 years before making the jump to another team or league. That is why the Wolves put him on loan. Congrats on scoring in Belgium but there will be a lot more growing pain for Fabio. Hopefully he is a "diamond in the rough" as they say and develop into a good player.