Can Fernandes get everybody talking about Bruno again? 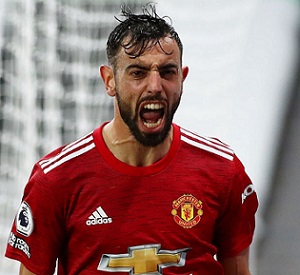 Bruno Fernandes burst onto the scene at Manchester United in January 2020 with a flurry of goals and assists, finding the target on 12 occasions through 23 appearances while teeing up a further eight efforts for grateful team-mates.

His role as a creative talisman for the Red Devils was quickly cemented, with his individual bar raised even further in the 2020-21 campaign. The Portugal international netted on 28 occasions that season and laid on another 17 strikes for those around him.

Such lofty standards were always going to be difficult to maintain, and Fernandes dipped alongside many of those around him the last term, scoring 10 times and assisting 13. United toiled, even with Cristiano Ronaldo back on their books, and are still searching for a spark.

Confidence is steadily building again heading into 2022-23, although English Premier League odds price them at +2500 for title glory and +170 to break back into the top four and book return tickets to a Champions League party.

Another good test. Thank you Melbourne we see you soon 💪 pic.twitter.com/CTN05heTHr

Erik ten Hag was appointed to help steer that ship, with experiments that saw Ole Gunnar Solskjaer and Ralf Rangnick take the wheel resulting in the Red Devils rather losing their way. They appear to be back on course, but there is still much to prove.

That is particularly true of the collective at Old Trafford, on the back of the club’s worst Premier League points return, but also applies to certain individuals. Fernandes slips into that category as so much is now expected of him and any supposed dip is going to be dissected in minute detail.

Back with a bang

As a proven performer at the very highest level, Fernandes has been eager to point out that there has been no regression on his part, with his game the same as it was when plaudits rained down on him a couple of years ago. His numbers in the end product department may have taken a hit, but that has not been for a lack of trying.

The classy playmaker has been around long enough to know that dissenting voices tend to come across louder than positive ones, and it is important to master the art of turning a deaf ear to those that have nothing nice to say.

He has, however, shown on countless occasions down the years that he can be the match-winner Ten Hag and United are crying out for. He will never operate in anybody’s shadow, even those cast by the likes of Ronaldo, and should theoretically be approaching the peak years of a career that has already delivered plenty of highs.

Whether he hits the ground running or not in the opening of another new era for a sleeping giant, the likelihood is that everybody will be talking about Bruno again in some capacity over the coming weeks and months.