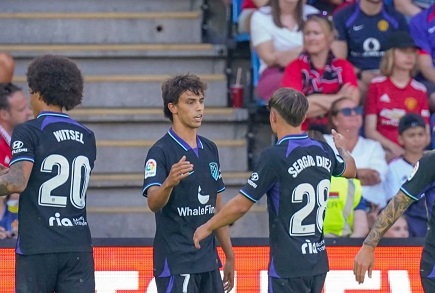 João Félix is preparing for what feels like a vital campaign ahead with Atletico Madrid, having enjoyed arguably the most positive run of form since arriving in Spain towards the latter stages of last season.

Félix came off the bench to score a stylish winner for Los Rojiblancos against Manchester United in their 1-0 friendly victory on Saturday, after which the former Benfica man was asked if he felt 2022-23 could be “his year” in La Liga.

Eight goals in the Spanish top flight – a personal best – and some sparkling displays in Europe saw Félix named Atletico’s Player of the Year in May, despite seeing his season cut short by a muscle injury in April. Now gearing up for his fourth year in Madrid since a big-money move from Benfica, the 22-year-old is focused on further improvement.

“I haven’t played for a long time, I’m happy to be back,” Félix told the Madrid press after his winner against United. “In the other years, I’ve always tried to be better. Will this be my year? I don’t know, but I’m doing everything in my power to be at the best level and help the club.

“I feel very good with anyone [at Atletico] as we all get along well on the pitch and the team has performed phenomenally. I arrived young and, although I still am, I’ve grown a lot. I’m sure I’ll grow more and I’m happy, with a calm head. When that is the case, things come naturally, I hope it’ll go well.

“I saw how well the team was doing and I’m happy to play in it. I want to do good things and have a really good season. If that happens everyone will be happy.

“I’m training hard, preparing in the best way to help the team. I’m almost at 100 percent. I’m certain it will be a very good season.”

Atletico open the season with a trip to city-rivals Getafe on Monday 15th August.