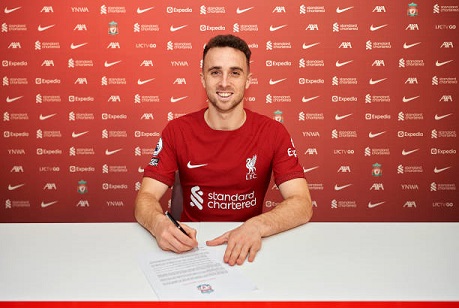 Portugal forward Diogo Jota has been rewarded for his excellent first two seasons at Liverpool with a new contract, tying him to the Premier League club until June 2027.

Jota joined the Reds from Wolverhampton Wanderers in the summer of 2020 for a fee of around €50m. In his two seasons at Anfield the former Porto man has established himself as a vital member of Jurgen Klopp’s squad, contributing 34 goals in 85 appearances.

Having earned a new 5-year deal at the club, Jota spoke to Liverpool’s in-house media about the news. “Well, really proud, I have to say,” he said. “Obviously since I arrived two years ago I established myself as an important player in this team – that’s what I wanted from the beginning.

“Now, signing a new long-term deal, it’s obviously from the club’s perspective proof of the belief in myself as a player. For me, obviously it’s really good to establish I’ll be here for a while. So, the beginning of a new season, let’s do it.

“[It was] a no-brainer, I have to say. Obviously one of the best clubs in the world. Last year was good for me and for the team. Like I said, [it’s] a proof we are doing things right and hopefully we can keep doing that.

“I think Liverpool at the moment is one of the best if not the best. We were close last year to winning the Champions League. That’s [something] all the players want. Hopefully we can give it a good go this year again. When you fight for everything, like we did last year, you just want to do it again and to do it better, because it’s possible.

“Have I changed as a player here? Well, quite different, I have to say. I obviously played kind of a different role as well most of the time. It helped me grow as a player, obviously more mature now, more knowledge of the game. Everything is better, I have to say. We need to obviously keep improving because I think I didn’t reach my prime yet. Hopefully during the duration of my stay here I’ll do that.”

Jota better than we had hoped - Klopp

Liverpool manager Klopp was quick to share in the satisfaction of Jota being tied down for his prime years, telling liverpoolfc.com that the 25-year-old has exceeded expectations since arriving from Wolves two years ago.

“What Diogo has brought to this team and this club since he arrived is there for all to see, so it is really good news that he has signed a new contract,” Klopp said. “Brilliant, brilliant news, I would say.

“His qualities are obvious. He scores goals – not a bad quality – he works unbelievably hard for the team, his pressing and counter-pressing are on an unbelievable level, he can play in all of our attacking roles and he has an incredible attitude. Not a bad package. Not bad at all.

“As a striker who can play on the wing, he gives us so many options and since he came to Liverpool he has improved so much.

“I have said before that Diogo is the player we hoped he would be but also a little bit better, so long may this continue.”