Renato Sanches joins PSG: “I’m sure I made the right decision” 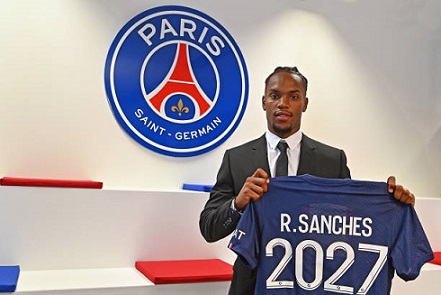 Paris Saint-Germain announced the signing of Portugal midfielder Renato Sanches on Thursday, and the former Benfica man says many factors contributed to his choice to join the French champions.

Sanches had long been tipped to join AC Milan until PSG entered the race earlier this summer, with new sporting director Luis Campos keen to reunite Sanches with his former Lille coach Christophe Galtier, who replaced Mauricio Pochettino as boss ahead of the new season.

“I think it’s the right choice,” Renato said after sealing the €15m move. “I think my decision would have been the same regardless, but I am of course happy to find Portuguese compatriots. It can also facilitate my integration. I already know Nuno Mendes and Danilo Pereira, but not Vitinha yet. I spoke with Nuno before my signature, who spoke well about Paris Saint-Germain.

“I know Galtier well! He’s a good coach, who has made me evolve a lot since I joined Ligue 1. Together, we even managed to win the championship with Lille. We did a good job together, and I’m happy to work with him again, as well as with the members of his staff. Working with a coach you know always makes things easier. Communication is easier.

“I am very happy with my arrival here, in Paris. These last few days have been very important for me, and for my family. I’m sure I made the right choice by joining the club. I chose Paris Saint-Germain because I think it’s the best project for me. Staying in France was important for me, because I already know this championship.”

Sanches had just one year left on his contract at Lille, resulting in what feels a bargain transfer fee of €15m. The Seleção man took part in his first training session alongside his new teammates on Friday and could make his debut for PSG in Saturday’s Ligue 1 opener at Clermont.

Best of luck to Renato at PSG. By the way, from the photo looks like he slimmed up. Looks great.