Paulo Fonseca off to ‘perfect start’ in France with Lille 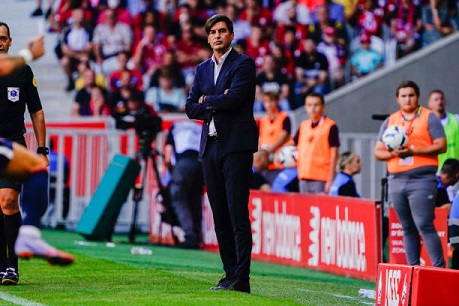 Portuguese boss Paulo Fonseca admits he could not have asked for a better debut as coach in Ligue 1, after watching his Lille side hammer newly-promoted Auxerre at the weekend.

Lille, who finished 10th last season, hosted Auxerre at the Venue Stade Pierre-Mauroy on Sunday with Tiago Djaló and José Fonte named in Fonseca’s first line-up. Les Dogues produced a rampant first half and led within a minute before going in 3-0 up at the break, then adding a fourth midway through the second half, giving the former Porto boss a dream opening day victory.

"I'm very happy with the victory, not only with the result but also with the way we got it,” Fonseca said after the game. “We prepared the game well and we did exactly what we had been doing in training during the week. The players were very rigorous and we started very well.

“We had a great first half where we didn't give Auxerre any chances. The team relaxed a bit in the second, the goal is to maintain that intensity throughout the game. We could have ended the game in a better way but we did so many good things, I can’t give too much value to the goal we suffered.

“We want to put intensity in the game. Not just with the ball but without the ball. We want to press high, we want to react fast. For this we have to be physically well-prepared. We worked on this and I think the team responded well today.

“I liked the mobility and the play in the spaces. I always want the players to start the games strong but I couldn't have a more perfect start. It gave a lot of confidence to the team, but we still have to improve because Ligue 1 is very strong.”

The summer transfer window has been a testing one for Fonseca, as Lille are coping with the departures of numerous players, including Renato Sanches who joined Paris Saint-Germain last week.