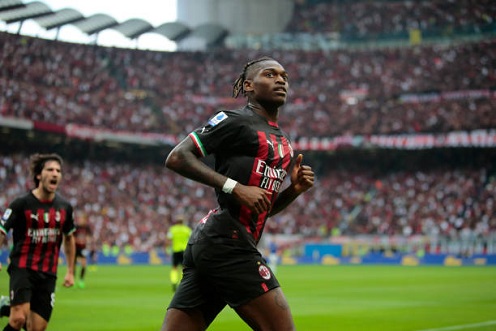 Portugal forward Rafael Leão was the undisputed star of the show in the Milan derby this weekend, with a performance which thoroughly justified the hype around the Rossoneri man.

Leão scored twice and registered an assist as AC Milan beat city rivals Inter 3-2 at San Siro. For Leão, the showing not only adds to his value in the market amid growing interest from abroad, but strengthens his hand in negotiations over a long overdue extension with the Italian champions.

Former Sporting man Leão showed great variation with his goals. Firstly, he finished acutely with his left foot into the top corner, before later beating his man and converting with a low placed shot inside the post. In between his goals, Leão provided a cross from which Frenchman Olivier Giroud scored in the second half.

Great take on the left foot by Rafael Leão toopic.twitter.com/4yESu1kv1n

Milan appear justified in their decision to resist approaches from Chelsea for Leão towards the end of the transfer window. The English club reportedly made a significant offer for the Portuguese, but Milan insisted they would reject anything less than the €150m release clause. Meanwhile, talks of a new contract for last season’s Player of the Year have stalled over differences in valuation and the club’s recent takeover.

Leão is still on the same 1.5m salary he signed when arriving from Lille in 2019, despite establishing himself as one of the stars of Serie A. The forward’s agent has requested a renewed salary similar to the €7m earned by Zlatan Ibrahimovic last term, while the club have been unwilling to go beyond €4.5m, leading to an impasse and the player remaining on a low wage relative to his status.

Leão certainly earned the respect of coach Stefano Pioli after his weekend performance. The Milan boss spoke to the media following the game and was glowing in his praise of the Seleção man. “Naturally, every time we put him in one-on-one situations, he’s an important weapon in our armoury,” Pioli said. “Rafa has a body language that might confuse people, but I can assure you he knows what potential he has and is very eager to learn.

“In order to improve, you need talent and intelligence, so Leão has both of those. We gave him the time and freedom to make mistakes so he could learn.”

I seen the game, this young man was so cool and calm it's scary. In my opinion, he deserves to be on top 11 of the national team.

Rafael Leao at his best is unplayable, but his detractors would say that he can be inconsistent. I'm hopeful that he will stay in Milan and continue to grow. He's more consistent now than he was the first half of last season and is making the...

Rafael Leao at his best is unplayable, but his detractors would say that he can be inconsistent. I'm hopeful that he will stay in Milan and continue to grow. He's more consistent now than he was the first half of last season and is making the right decision more often now. There is no question he's a starter for the selecao... the question is who is he bumping to the bench?!?!?!?!?

I'd say he's bumping Jota. Although Joao Felix might have something to say...but we need Leao's speed.

Scary good when on his game which is more often than not nowadays. Incredible performance from Leao.