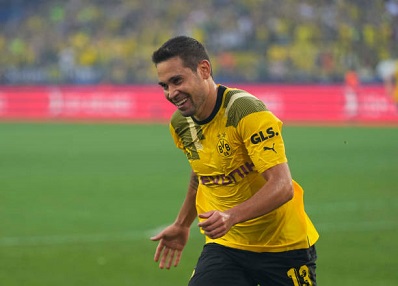 The Champions League group phase kicked off this week and already Portuguese players were among the scorers on an entertaining first Matchday across Europe’s premier club competition.

Raphaël Guerreiro was on the scoresheet as Borussia Dortmund made a winning start by beating Copenhagen 3-0 in Germany, while Rúben Dias notched his first goal of 2022 in Manchester City’s convincing 4-0 hammering of Sevilla away from home, in a match which saw João Cancelo register two assists.

One of the first matches of this year’s competition saw Dortmund entertain Danish champions Copenhagen at Westfalenstadion. The Germans ran out comfortable 3-0 winners and caught the eye in the first half with two brilliantly-taken goals, the second of which was finished by Portugal left-back Raphaël Guerreiro.

Marco Reus had already put Dortmund ahead with a well-taken goal from Julian Brandt’s excellent pass ten minutes before half time, with Guerreiro then doubling the lead shortly before the break. The Seleção man broke forward to receive the ball in the attacking third and played a neat one-two with Gio Reyna before finding the net with a simple finish.

Jude Bellingham finished the scoring with another brilliant team goal, making it a solid start for the Germans. Guerreiro’s contribution was enough for him to be rated Man of the Match by whoscored.com, after scoring his second goal in three matches for Dortmund.

Also in Group G, Manchester City secured an even more emphatic victory by thrashing Sevilla in Spain later the same evening. In-form Erling Haaland scored twice either side of Phil Foden’s strike, leaving defender Rúben Dias to complete the night’s work. João Cancelo had played the pass for Foden’s goal and the former Benfica man’s low cross was converted from close-range by Dias in the second minute of injury time.

Diogo Jota stepped up his return to action with his second substitute appearance of the season in Group A, but it was a night to forget for Liverpool as they suffered a 4-1 defeat to Napoli. Jota came on to play around half an hour in Italy, while full-back Mario Rui was a late introduction for the victorious hosts. In the group’s other game, Francisco Conceição was an unused substitute as Ajax hammered Rangers 4-0 in Amsterdam.

AC Milan started with a 1-1 draw at Club Brugge in Belgium, with in-form Rafael Leão providing a neat assist for Alexis Saelemaekers’ first-half equaliser. In Benfica’s Group F, Portuguese duo Nuno Mendes and Vitinha started for Paris Saint-Germain, who beat Juventus 2-1 in the French capital, while Danilo (78’) and Renato Sanches (87’) were late introductions. Jota played most of the match as Scottish champions Celtic were comfortably beaten 3-0 at home by Real Madrid in Group F, while in Group D, Nuno Tavares played the full 90 minutes of Marseille’s 2-0 defeat at Tottenham Hotspur.