“This is Udinese’s moment, not mine” – Portuguese forward Beto remaining humble amid goalscoring streak 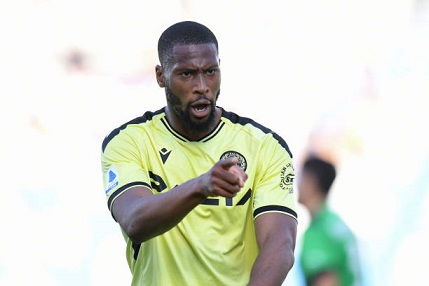 Portuguese striker Beto is one of the in-form players in Italian football during the early stages of the new Serie A season, having helped Udinese come from behind to earn victory at Sassuolo on Sunday.

Beto came off the bench to bag a brace, making it four goals from his last four matches and positioning himself as one of the league’s leading goalscorers. The result sees Udinese, who last week hammered Jose Mourinho’s Roma 4-0 at home, move up to 4th place in the standings.

Sassuolo took the lead in the 33rd minute through Davide Frattesi but the game changed significantly just before half time when the leaders had defender Ruan sent off for a last-man tactical foul. Beto was introduced midway through the second period and his header levelled things up with fifteen minutes left to play.

Udinese’s Lazar Samardzic completed the turnaround with a brilliant finish in the first minute of injury time to put the visitors ahead, after which Beto kept his composure to find the net when put through one-on-one with the goalkeeper to make it 3-1. With four goals in Serie A, only Bologna’s Marko Arnautovic has scored more than Beto so far this campaign.

Related article: From working at KFC to starring in Serie A – Udinese’s Beto speaks on always believing

Beto was one of the breakout stars in the Italian top flight last term following his move from Portimonense, scoring 11 goals and even seeing his name linked with champions AC Milan in the summer. Further goalscoring exploits will no doubt increase interest from other clubs, while some are speculating on whether Beto will soon force his way into Portugal boss Fernando Santos’ plans.

“It was an emotional roller-coaster of a game,” Beto said of the encounter. “We did a great job after going behind. We kept our heads up, always looking forward. We won and that’s the most important thing. I saw from the bench that it was a tight game and it was difficult to make the breakthrough. However, this Udinese has a great mentality and is full of desire.

“This is Udinese’s moment in the sun, not just Beto’s moment. Because I’m part of the team. I scored twice today but that was down to teamwork. Both the team and I are having a great spell right now. We’ll celebrate today and then have a day off. After that we’re preparing for our next game against Inter. That’s our target, to win next week and work even harder for it.”