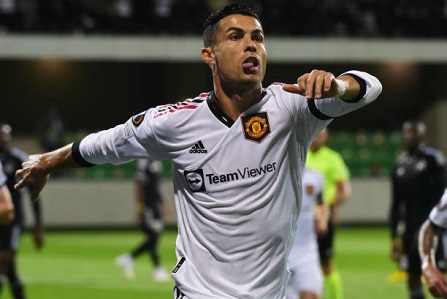 Cristiano Ronaldo scored his first goal of the season from the penalty spot as Manchester United cruised to a comfortable 2-0 victory over Sheriff in the Europa League last night.

Ronaldo’s first-half spot kick added to an opener by Jadon Sancho, giving United a much-needed three points in Group E. Ronaldo has been slowly building his fitness and after the match United manager Erik ten Hag was positive about the Portugal captain’s progress under his new regime.

“We could expect this, when you miss pre-season,” said Ten Hag, when asked about Ronaldo’s gradual rise in involvement and performance. “So he has to work really hard and invest to get the right fitness and then he will score more goals. You can see he is really close. When he gets fitter, he will finish them.

United’s clash with rivals Leeds United on Sunday has been cancelled, as was the case with last weekend’s trip to Crystal Palace. The Red Devils’ next Premier League outing will be the Manchester derby on October 2nd against Pep Guardiola’s City, coming almost a month after Ronaldo and co. last played a domestic fixture.