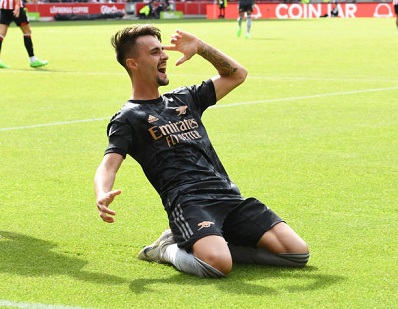 This weekend saw midfielders take much of the goalscoring burden in the Portuguese Abroad section, led by Fábio Vieira and André Almeida scoring their first goals for Arsenal in England and Valencia in Spain respectively.

Elsewhere, João Palhinha is already proving a hero with new club Fulham after a sensational strike in their victory over Nottingham Forest in the Premier League, while in Turkey Sérgio Oliveira struck inside the first minute to open his account for Galatasaray and Miguel Crespo’s goal helped Jorge Jesus and Fenerbahce to victory.

Fábio Vieira marked his full Premier League debut for Arsenal with a superb goal as the Premier League leaders got back to winning ways with an impressive 3-0 cruise at Brentford. Early season injury issues meant Vieira had to wait until midweek for his first start for the Gunners in their Europa League clash with FC Zurich in Switzerland, and the Portuguese kept his place for Sunday’s trip to Brentford.

Arsenal were 2-0 up at the break thanks to early goals from William Saliba and Gabriel Jesus, before Vieira made the game safe less than five minutes after the restart. The summer arrival from Porto let fly with a left-footed shot from outside the area which clipped the inside of the post before beating David Raya in the host’s goal.

Mikel Arteta spoke at length about the Portuguese after the match, including where the Arsenal boss sees Vieira fitting into his side on a regular basis. “I think he’s having a good progression,” Arteta said. “Obviously he missed the whole of pre-season due to injury, that was really unlucky. But we know his talent, the reasons why we signed him and what he can bring to the team. To do it against Brentford, at this ground, on his debut, is a different story. He showed again his character and his qualities.

“His role? That’s something that still needs to be decided. In those two attacking midfield positions, for sure. He’s played off the side as well, so it’s more about the relations he has in the unit and on his side, and where he is more comfortable. But the position he played today fits him really well.

“He is like this [taking risks] because he’s a creative player. He needs to play with his gut feeling and his instinct. That’s what he needs to do and we need to create as many scenarios for him as possible to put his talent to the service of the team. What I like as well is the way he competes, and the way he went about the ugly part of the game really impressed me.”

Fulham are enjoying a fine start to the season under Marco Silva upon their return to the Premier League. The Cottagers find themselves 6th in the table thanks to a 3-2 victory at fellow newly-promoted outfit Nottingham Forest, with Portugal midfielder João Palhinha scoring the pick of the goals.

Having trailed 1-0 at half time, Fulham struck three times in the space of six minutes to lead 3-1 on the hour. Palhinha, who was signed for 23m from Sporting in the summer, scored the second goal to put the visitors ahead, receiving a cutback 20 yards out and placing a shot into the top corner for his second goal of the season.

A reminder of what João Palhinha did on Friday 🇵🇹
pic.twitter.com/MdQABxiFfr

“I think we were the best team on them pitch and deserved the three points,” Silva said after the match. “I think if we analysed the match, we deserved clearly the three points. The way we started the game, even after conceding the early goal, we came and took control of the match.

“The first time Nottingham went in our 18-yard box they won a corner and scored. We knew we made a mistake in that moment; we weren’t as aggressive as we should have been. We pushed them back, not really creating many chances. Within us, I believe in our offensive set-pieces that we could equalise the game.

“We had a chat at half-time to keep the same set up, but do it quicker, much more dynamic, much more aggressive on the ball, more speed in circulation, because after that I told them the space will appear. In the second half, much better. The way we won, the way we started the second goal as well, a great strike from João.

“Great strike from João as well. To see our number six arriving to score that goal shows our philosophy, shows our ambition as a team as well and that is a fantastic thing as well.”

Almeida making his mark at Valencia

Another summer recruit scoring goals from midfield is André Almeida, who found the net for the first time with Valencia as they beat Celta Vigo 3-0 in La Liga. Los Ches were comfortable winners at the Mestalla and Almeida, who played on the right of a three-man central midfield in Gennaro Gattuso’s 4-3-3 system, rounded off the scoring in stoppage time.

“It's always important to win,” said the summer recruit from Vitoria. “We have to be strong at home. I'm very happy to be able to help the team. The most important thing is to win.

“I'm very happy. Getting off to a good start is important. Now I have to continue working to improve. I entered the area and shot with power and desire. It went in and I'm very happy. The first goal is always special, but I want to do more. I always want more.

“The fans help us a lot, and they give us more strength. It is very important for us to feel the support of the fans. It is always an honour to represent my team. After a win it's easier. I'm very happy,” concluded the 22-year-old to www.valenciacf.com.

Continuing the theme of midfielders finding the net, former FC Porto man Sérgio Oliveira scored for the first time since joining Galatasaray by putting his team ahead inside the first minute against Konyaspor. Oliveira helped ensure that his side remain level with Turkish Super Lig leaders Adan Demirspor by finishing from close range in a 2-1 win on Friday evening.

Sérgio Oliveira scored in the 1st minute of Galatasaray’s win this weekendpic.twitter.com/2slDrOLVvm

Jorge Jesus’ Fenerbahce continued their good recent form with a 5-0 thrashing of Alanyaspor, with a highlight coming in the form of Miguel Crespo’s excellently-taken strike to put Fener three goals ahead. Also in the Turkish top flight this weekend, Miguel Cardoso was among the scorers as Kayserispor won 4-0 away against Hatayspor.

Tiago Tomás scored his first goal of the season for VFB Stuttgart in Germany, but the former Sporting forward’s strike was a mere consolation as his side were beaten 3-1 at home by Frankfurt in the Bundesliga. In the United States, there was a first MLS goal for ex- Paços de Ferreira midfielder Nuno Santos, who scored an important equaliser in Charlotte FC’s dramatic comeback at Chicago Fire, which saw them trail 2-0 midway through the second half yet run out 3-2 winners.

Great to see Portuguese midfielder Nuno Santos get his first goal in MLS this weekend for Charlotte FC pic.twitter.com/QRqa2fYMx9

In Poland, there were birthday celebrations for veteran Flávio Paixão on Monday as the striker turned 38 years old, and the occasion came after he had scored a brace for Lechia Gdansk in a 2-2 draw with Jagiellonia Bialystok. Also in the Ekstraklasa, Portugal U21 international Afonso Sousa grabbed the winner for Lech Poznan in a 1-0 win at city rivals Warta Poznan.

Portugal U21 international Afonso Sousa got the winner for Lech Poznan in Poland this week pic.twitter.com/VuYxmWGqcB

Finally, there were goals in the lesser-heralded corners of Britain for Dagenham & Redbridge’s Mauro Vilhete in England’s National League and Pedro Mendes with Welsh outfit Connah’s Quay, while Leonardo Rocha struck for Lierse K in Belgium’s second tier and ex-Chaves midfielder Benny helped Doxa to victory in the Cypriot Division 1.