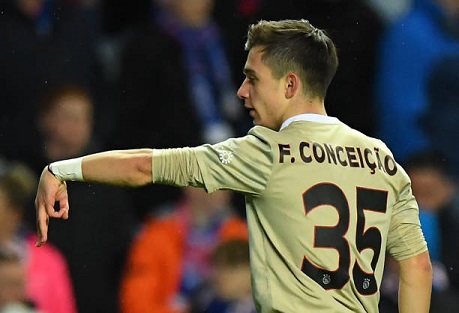 The final matchday of the Champions League group phase proved fruitful for goals among Portugal’s foreign contingent, with a particular contribution from some of the younger exports plying their trade abroad in Europe’s premier club competition.

Full-back Nuno Mendes came off the bench to score a superb winner for Paris Saint-Germain away at Juventus, which would have won the French champions top spot in Group H had it not been for Benfica’s heroics. There was also a well-taken first Ajax goal for Francisco Conceição, while Andre Silva’s strike helped RB Leipzig to victory and former Benfica forward Jota scored a stunning free-kick for Celtic at the Bernabeu.

Paris Saint-Germain and Benfica had already qualified from Group H heading into the final matchday, during which the French champions believed any win over Juventus in Turin would likely see them top the section ahead of Benfica on goal difference. As it turned out, the Eagles’ 6-1 win over Maccabi Haifa in Israel saw them secure 1st place despite PSG running out 2-1 victors in their match.

Kylian Mbappe’s early goal for PSG at the Allianz Stadium was cancelled out by Juve’s Leonardo Bonucci to see the teams level at 1-1 going into half time. Vitinha and Renato Sanches, who came on for the injured Fabian Ruiz midway through the first period, were joined in the PSG ranks by fellow Portuguese Nuno Mendes on 68 minutes and the substitution proved decisive.

Mendes embarked on a trademark burst forward down the left and latched onto Mbappe’s pass before rifling his shot past Wojciech Szczesny in the Juventus goal. Mendes’ effort gave PSG a 2-1 lead which they saw out with the help of Danilo, who came on to feature in the final few minutes, but João Mário’s late strike for Benfica rendered the victory meaningless in the race for top spot. [highlights]

Group A had also been settled in terms of qualification going into Tuesday evening’s final round. Napoli and Liverpool were assured of a place in the knockout phase, meaning Ajax and Rangers were left to contest the Europa League spot, as the Dutch giants travelled to Glasgow merely needing to avoid a five-goal defeat to make sure of 3rd place.

Ajax forward Steven Berghuis killed off any chance of an improbable turnaround by giving the visitors the lead inside the first few minutes, and a 2-1 lead for the Eredivisie champions going into the final moments allowed for the introduction of youngster Francisco Conceição. The summer recruit from Porto has yet to start a game for Ajax, but his case for a full debut was aided when he finished coolly to put his team 3-1 up, scoring his first goal for the club just a minute after coming on. [highlights]

“Happy to have scored my first goal for Ajax, big thanks to all fans for your amazing support,” Conceição said on social media. “We are a Champions League club, it's where we belong. But now it's back to work to get the best out of this season.”

RB Leipzig progressed to the knockout phase with a stunning 4-0 win over Ukrainians Shakhtar Donetsk in the neutral venue of Warsaw. Leipzig needed a draw to join Real Madrid in the next round, but Christopher Nkunku’s goal after 10 minutes gave the Germans an early advantage and they led 1-0 at the break.

Former Porto striker André Silva provided Leipzig with breathing space when he bundled the ball home at the back post within five minutes of the re-start, scoring his third goal in this season’s competition. Dominik Szoboszlai and Valerii Bondar added further goals to cement Leipzig’s victory and send them through with an impressive 12 points. [highlights]

Scottish champions Celtic finished bottom of the group behind Shakhtar after they were hammered 5-1 by Real Madrid in the Bernabeu. Portuguese forward Jota was surprisingly not selected for the match, but came off the bench to score Celtic’s goal with a fantastic long-range free-kick on 84 minutes, giving the visitors a consolation against the European champions. [highlights]