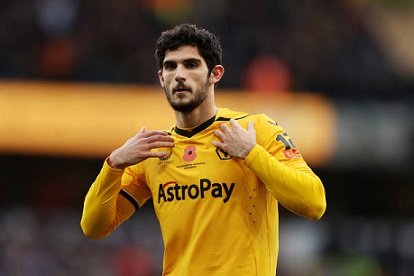 On what was mostly the penultimate round of league matches before the World Cup break, several Portugal squad hopefuls were on target this weekend across Europe. Leading the way is Gonçalo Guedes, who scored his first goal of the season for Wolverhampton Wanderers just days before Fernando Santos names his 26-man party.

Elsewhere, João Félix again proved a point despite his substitute status at Atletico Madrid with a brilliantly-taken equaliser in La Liga, while Beto was back on the goals trail in Italy with Udinese. Ruben Neves scored from the spot for Wolves as José Fonte grabbed a record-setting goal for Lille, while Rony Lopes continues to build momentum in Ligue 1 with Troyes and Danilo was the matchwinner for Paris Saint-Germain.

Wolverhampton Wanderers interim manager Steve Davis says he was encouraged by the form of Gonçalo Guedes after the Portugal international scored his first goal for the club this weekend. Guedes, who arrived in the summer from Valencia, got an early equaliser on Saturday as 10-man Wolves were beaten 3-2 at home by Brighton & Hove Albion, on a day that also saw Rúben Neves on the scoresheet.

Having gone ten Premier League appearances without netting his first goal, former Benfica man Guedes struck in the 12th minute at Molineux when he got on the end of Boubacar Traore’s throughball and kept his balance under pressure from defenders to prod past Robert Sanchez. Neves put the hosts 2-1 up from the penalty spot following a handball award, but Brighton’s Kaoru Mitoma levelled the scores up again at 2-2 a minute before the break.

The key moment in the match was to arrive on the stroke of half time and involved another of Wolves’ Portuguese contingent. Nélson Semedo pulled the dangerous Mitoma down during first-half stoppage time to deny a goalscoring opportunity and was issued a straight red card. Wolves held Brighton at bay for most of the second half but succumbed to Pascal Gross’ 83rd-minute winner.

Speaking after the match, interim boss Davis – who will be replaced by Spaniard Julen Lopetegui after the World Cup – was asked about Guedes’ impact. “He’s been training well, and we spoke to him this week, we had him in the office and we had to find a different way of playing, with Daniel [Podence] playing inside the pitch more,” said Davis.

“That enabled the full-backs to get a little bit more. We know his qualities and he’s not produced it yet, but I thought today he showed signs of it and, as an individual, he can build on it now.”

For the second weekend running in La Liga, João Félix came off the bench to score for Atletico Madrid as Los Rojiblancos again dropped points. Félix scored twice after being introduced by Diego Simeone in a 3-2 defeat to Cadiz last week, but was again left out of the line-up for Atletico’s home clash with Espanyol on Sunday.

Espanyol broke the deadlock after a goalless first hour by taking the lead through midfielder Darder, after which Félix was quickly summoned by Simeone. The former Benfica forward drew his team level on 78 minutes when he latched onto Joselu’s pass on the left channel before controlling with his chest and smashing a ferocious left-footed finish past Benjamin Lecomte from a tight angle.

Félix will miss Atletico’s midweek trip to Mallorca in what is their final La Liga match before the World Cup, having accumulated five yellow cards. “João’s entrance, just like in Cádiz, showed what we all want from him and it’s a shame that he can’t be against Mallorca because of his yellow card,” Simeone said.

As Fernando Santos prepares to announce his World Cup squad, Beto returned to goalscoring form to strengthen his outside case for inclusion. The ex Portimonense striker has been a revelation in Italian football with Udinese and looks set to improve upon a promising debut campaign with an increased goals tally this term.

Udinese were held to a 1-1 draw at home by Lecce on Friday evening in Serie A, but Beto’s predatory instincts were again on display as he turned in Isaac Success’ cutback to level the scoring midway through the second half at the Dacia Arena.

Beto’s goal ended a brief goal drought stretching back a month, but after the match he told reporters: “I missed scoring and of course I lacked a little confidence which I need, but the confidence comes from the way I work. I could also have done more today with other chances. I always want to score but teamwork is the most important thing and winning comes first. Today we weren’t successful, but I think we played well.

Beto hit 11 goals in his first season in Serie A and with six already is on course to better his record. The Portuguese ranks among the highest players in the league for chance conversion, having netted his six goals despite only appearing six times as a starter for the Bianconeri.

Danilo the hero for PSG

Portugal international Danilo was the surprise match-winner for a star-studded Paris Saint-Germain side in their 2-1 victory at Lorient in France. The champions looked to be headed for a draw at the Stade Yves Allainmat, until the former Porto man rose to power a header from a corner on 81 minutes to give his side the points.

Vitinha and Nuno Mendes joined Danilo in the PSG starting line-up, while Renato Sanches was introduced midway through the second half. The win was the Parisians’ sixth straight triumph in all competitions and sees them five points clear at the top of the table.

José Fonte entered the record books as the oldest goalscorer in Lille’s history this weekend. The Dogues captain scored from close range to put his team ahead against Rennes on Sunday, although Rennes ended up taking a share of the spoils with a 1-1 draw thanks to Bejamin Bourigeaud’s second-half penalty awarded after a foul by Portuguese defender Tiago Djaló.

Fonte’s goal means, at 38 years and 319 days, he becomes the oldest scorer in the history of Lille, overtaking Milan Roeder (38 years and 272 days) in the record books. Last season, the defender became the oldest player to play every single minute in Ligue 1, beating the record set by legendary Cameroon goalkeeper Joseph-Antoine Bell with Saint-Etienne in the 1992-93 season.

Speaking about the draw against Rennes, Fonte was frustrated that Paulo Fonseca’s Lille team did not get the result their domination deserved. “It will turn,” Fonte said. “It’s impossible to go on like this. We do everything to win the match and sometimes it doesn’t go for you. It's football.

“The quality, the desire and the investment are there. We have occasions but there are times when it doesn’t go for you. In my opinion, there is no foul for the penalty.”

Elsewhere in Ligue 1, Rony Lopes has two goals in three games for Troyes as he enjoys a return to form amid a career diverted by injuries. The Portugal international was rated one of the best players on the pitch in Troyes’ 1-1 draw with Auxerre, during which he opened the scoring with a sweeping left foot finish from Mama Balde’s cutback.

However, Troyes were denied the victory by an 86th-minute Auxerre equaliser, leaving Lopes frustrated. “We should have left with three points so we’re very down,” Lopes said after the match. “We have to find what’s missing because this is not the first match in which we have been punished like this. The match is 90 minutes and sometimes we stop playing, so we have to correct that because the team has a lot of quality.”

The rest: Tiago Tomás stunner in Germany; Lucas João on target in the Championship

Former Sporting forward Tiago Tomás was unfortunate to be on the losing side after scoring a wonderful goal for VFB Stuttgart in the German Bundesliga. Tomás spun his marker inside the box and finished with a beautiful right-footed shot as Stuttgart lost 3-1 at Borussia Monchengladbach on Friday night. The goal was the 20-year-old’s second of the season in the league for Stuttgart, who are once again struggling in 16th place.

Lucas João scored his first goal in two months for Reading in the Championship on Friday night, but it was not enough to prevent the Royals from a 2-1 home defeat to Preston North End. João is regarded as one of the best finishers in the English second tier, but the former Nacional man has started just 9 of his team’s 19 matches as he struggles with form and fitness.

In the Turkish second tier, Marco Paixão is in rich goalscoring form, with the 38-year-old making it five goals from his last four outings during Altay’s 1-1 draw with Bandirmaspor. Pedro Eugenio is Kazakhstan’s top marksman and his 18th of the season set Astana on their way to a 3-2 win at Shakhter Karagandy.

Similarly, the top goalscorer in the Belgian second tier is also a Portuguese – Leonardo Rocha, who was born in Almada, scored his 9th of the season for Lierse K in victory over Genk II. In neighbouring Luxembourg, Differdange came from two goals behind to win 3-2 at Victoria Rosport, thanks to late strikes from Tino Barbosa and João Simões. Gabriel Gaspar had scored for the hosts.

There was plenty of Portuguese contribution in the Polish Ekstraklasa this weekend, led by former Benfica and Nottingham Forest defender Yuri Ribeiro scoring an 87th-minute winner for Legia Warsaw to defeat Lechia Gdansk 2-1 at home, while João Amaral scored for champions Lech Poznan in their 3-2 win over Korona Kielce. City rivals Warta Poznan won 2-0 at Piast Gliwice, with former Sporting man Miguel Luís getting the opener, while Luís Machado’s goal helped Radiomak Radom overcome Widzew Lodz 3-1 away from home.

In Switzerland, Asumah Abubakar earned Luzern a point with an equaliser in their 1-1 draw Winterthur. Finally in Cyprus, former Boavista forward Rafael Lopes struck for AEK Larnaca in a 2-1 win at Akritas, while Kiko’s goal set Anorthosis on their way to beating Nea Salamis 2-1 in the 1 Division.

João Félix is a fantastic player but playing under the wrong manager at the club.

If Fernando Santos uses him intelligently he can be lethal in attack alongside C Ronaldo and Bernardo Silva.

Agree, the only exciting thing at Atletico

Simeone is the worst. At this point it has to be something personal btw him and Felix. It's not like Atletico have been playing great with Felix on the bench. I really hope he moves on in the summer.

The thing about Simeone is he has been treated like a darling by the media even tho he is a one trick...

The thing about Simeone is he has been treated like a darling by the media even tho he is a one trick pony. A team with Corea, Griezmann, Carrasco, Llorente, Lemar, Felix, De Paul, Morata, Kondogbia, Koke and they managed all of 21 goals for? Thats pathetic, they should be beating Madrid in GF.....

A coach incapable of getting the best from his players is a bad coach. You want a comparison? Udinese in Serie A has 21 goals with who? Fulham has 23 goals for! THOSE are good coaches, Simeone is a donkey.