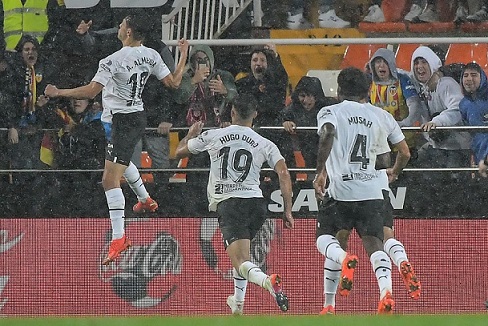 André Almeida scored a brilliant free-kick to open the scoring in Valencia’s 3-0 win over Real Betis on Thursday night, after which the Portuguese admitting it was the first time he had converted a set-piece in his career.

Almeida, who arrived at the Mestalla from V. Guimarães in a €7.5m deal during the summer, has enjoyed a promising start in Spanish football, having now scored twice for his new team adding to two assists since arriving in La Liga.

“I’m very happy. It was my first free-kick goal and being able to help the team win is the most important thing,” he told Movistar+. “Winning was fundamental for us. We have to train free-kicks in training and I achieved the goal. The work bears fruit.”

André Almeida scored the first free-kick of his career for Valencia against Betis 🎯🇵🇹
pic.twitter.com/nHIBVOaRni

Fellow Portuguese Thierry Correia also started the match at right-back for Valencia, who moved up to 10th place. Betis had Rui Silva in goal and William Carvalho in midfield, but were left to count the cost of a red card to Edgar Gonzalez which immediately preceded Almeida’s free-kick in the 63rd minute.