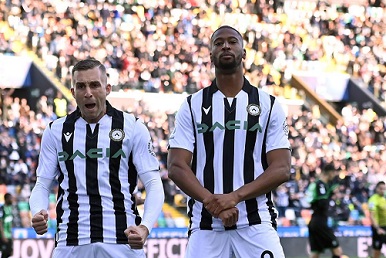 Portuguese striker Beto is emerging as one of the most lethal strikers in Italian football. The former Portimonense man often finds himself near the top of the statistical charts in Serie A for chance conversion, while only three players have scored more goals so far in the early stages of the current campaign.

Yet in the aftermath of being overlooked by Fernando Santos for Portugal’s World Cup squad, the humble Lisbon-native gave an interview to EFE in which he was refreshingly honest about his current form, which sees him joint-3rd in the goalscoring charts with six goals.

“Of course I want to beat my eleven goals from last season, because if I do, it means I’ll be doing better this year,” Beto said. “I don’t believe I’m a key player, I score goals but my performances at the moment are not that good. If I score but don’t play well, I’m not satisfied, although I’m not happy if I play well and don’t score.

“I have to find a balance between playing well and scoring goals. At the moment I think I’m not playing at the level I can play at. If we talk about numbers, it’s my best moment, but I don’t think I’m 100% confident. In statistical terms, yes, but in the game I believe I can improve. What I want is to help my team, win games, and if I can score, make assists and play good games, that’s very good.”

Related article: From working at KFC to starring in Serie A – Udinese’s Beto speaks on always believing

Beto was somewhat of a revelation in the Italian top flight last term, arriving as an almost unknown and netting 11 league goals for the Bianconeri. He appears on-course to improve upon his tally with Udinese, who enjoyed a strong start to the current campaign but have now drawn five of their last six matches.

“I was lucky enough to arrive [here] during an international break and I had two weeks to adapt better, which made me feel more comfortable. But in terms of the league, I needed time to understand the game, although for me the most difficult thing was adapting to my teammates and them learning how I play.

“We are doing well, we are doing our best to win, but the victories are not showing. We can’t give up; we have to keep going. We are all working hard to be mentally strong and we want to get back to winning ways. To be honest, we are not too far off our goal. We think game by game, we want to win every game and now we are focused on Napoli [on Saturday.]”

Beto with another poacher’s goal in Udinese’s last game. Has a real instinct for being in the right place. pic.twitter.com/3cpkcG4q5X

jcouto
This comment was minimized by the moderator on the site

I love the way this guy plays. Beto is going to get a lot of caps before he is done.

jcouto
There are no comments posted here yet