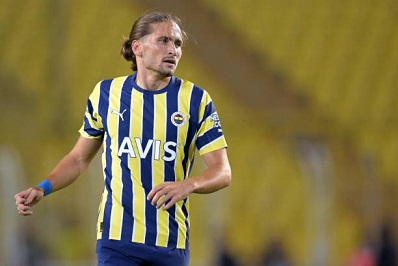 Miguel Crespo is fast becoming one of the most talked-about midfielders outside Europe’s major leagues. The midfielder’s form under Jorge Jesus at Turkish giants Fenerbahçe has propelled the previously little-known Portuguese to being linked with some of the continent’s biggest clubs.

A place in Fernando Santos’ Portugal squad for the World Cup was never a realistic prospect for the 26-year-old, but while Crespo still harbours ambitions of representing the Selecao in the future, there is now the emerging option of playing for his adopted country Turkey.

Crespo left Estoril last summer after helping the Lisbon club to promotion from Liga Portugal 2, joining Fenerbahçe, then coached by Vitor Pereira, as an almost unknown. After overcoming initial doubts over his quality, Crespo has since established himself as one of the most impressive members of the team, which now leads the Super Lig under Jorge Jesus.

“My transfer to Fenerbahçe developed very quickly,” he said in an interview earlier this month. “Vitor Pereira wanted me very much. I am very happy to have come to Fenerbahçe, I worked hard for it. I am grateful to Vitor Pereira.

“When I first came, I saw the news; the comments made. I was not upset at all. A football player from the Portuguese 2nd League coming to a team like Fenerbahçe... I could understand them. But the words made me even more ambitious. I try every day to do my best.”

Born in France to Luso parents before re-locating to Portugal as a child, Crespo spent time in the FC Porto academy and Braga’s B team before his career was launched by Estoril as a relatively late age. The tough road to the top has seemingly made Crespo a fierce competitor in Istanbul, while scoring in a 2-1 win at fierce rivals Galatasaray shortly after arriving certainly endeared him to his new club’s fans.

“The fact that my first goal in Fenerbahçe was against Galatasaray was an important and imprinted moment for me,” Crespo recalls. “That goal boosted my self-confidence and was a turning point for my career.

“The players who played here said that when you score a goal against Galatasaray, you really become one of the Fenerbahçe fans. Those who score goals against Galatasaray have a place in our community. I am very happy to be in history.”

Crespo has seen his name linked with the likes of Atletico Madrid and Internazionale in recent weeks, with many anticipating incoming bids as early as January. It remains to be seen where his future lies, with an international career perhaps representing a key factor in whether Crespo opts to remain in Turkey or make the jump to one of Europe’s bigger leagues.

“With the arrival of Jorge Jesus, our game philosophy has changed,” he said. “We play more aggressively, more pressing. It creates difficulties for our opponents. We continue on our way calmly. We focus on our work, we want to celebrate this together at the end of the season.

“I was not disappointed I could not go to the World Cup with the Portugal National Team. There are many Portuguese players, I will continue working on my game to be called up one day. If an offer comes from the Turkish National Team, I have to sit down and evaluate it with my family.

“The Turkish League is enjoyable. I don’t have any clubs in my head. I’m thinking of becoming a champion in Fenerbahçe. Then we will look at the transfer. I said that the Portugal National Team is my dream, another dream is to play in the English Premier League.

“I grew up dreaming of playing in the Portuguese National Team since I was a child, but of course I would be happy if an offer came from the Turkish National Team. I would think about it with my family.”