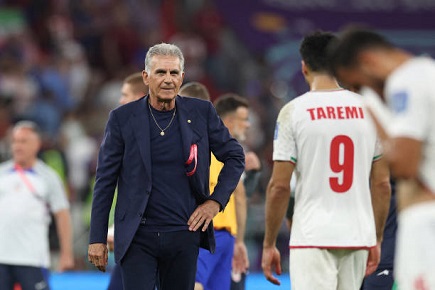 Iran’s elimination from the World Cup on Tuesday night proved the final match at the helm for coach Carlos Queiroz, who announced the end of his second term in a statement the following day.

Queiroz’s side needed a point from their Group B clash with the United States, but a 1-0 defeat means Iran finish 3rd and head home. Less than 24 hours later, Queiroz spoke of his pride at leading the country at what has been a challenging period.

In Football there is no that thing of moral wins, but also there is nothing immoral when you don't achieve your dreams, as far you did your Best with full desire and brave winning mentality.

I am proud of you and once more you were brilliant on and off the pitch.

It was a honour and privilege to be part of this Football family. I do believe that you deserve full respect delivering
credibility to your Country and Football supporters.

Wish you all happiness, peace, success and Health.

Iran’s participation at Qatar 2022 has been largely overshadowed by civil unrest back home, with Queiroz regularly forced to field questions about the strife of the Iranian people. Mass protests spread across the country following the death in police custody of 22-year-old Iranian woman Mahsa Amini in police custody, after which up to 400 people are thought to have been killed as a result of security forces’ response to the demonstrations.

Queiroz enjoyed an 8-year spell in charge of Iran from 2011 to 2019, during which the team qualified for back-to-back World Cups. The 69-year-old was re-hired earlier this year following an unsuccessful spell with Colombia and taking Egypt to an African Nations Cup final penalty shootout defeat to Senegal, before stepping down after the North Africans failed to qualify for the World Cup.

I don't get what the beef is with Portuguese fans with Carlos seems like a really intelligent guy well spoken philosophical, ex players have spoken really highly of him I've heard a Iranian fans speak really highly of him. Is it because of that incident when he coached Portugal in 2010 when him and Ronaldo had that public beef I get that but players and coaches they all have egos unfortunately it became public. Overall though he seems like a really good guy from what I've heard an interviews and I'll just leave it at that.

It wasnt just Ronaldo, it was the entire squad. To this day Moutinho wont speak to Queiroz. It was an out and out disaster. They had a good team who only managed to score v North Korea, they didnt manage 1 goal in the 3 other games and...

It wasnt just Ronaldo, it was the entire squad. To this day Moutinho wont speak to Queiroz. It was an out and out disaster. They had a good team who only managed to score v North Korea, they didnt manage 1 goal in the 3 other games and looked abysmal in doing so.

Dont forget the Bebe disaster as well it was CQ who brought Bebe to Man United to line his pockets and we all know how that turned out.

He is part of the 1 trick pony coaches who only know how to stack defenders on top of each other, like Bento-box. Refuse to change to adapt, even when staring at elimination in the face they stubbornly hold onto their backwards beliefs.

When Portugal played Iran a couple years back no one shook Queiroz hand from the Portugal squad and CQ had a sucky fit and complained to Fernando Santos. He also claimed Iran were robbed. He is a delusional clown, Iran can have him.