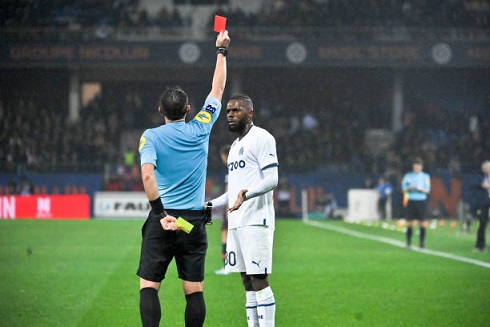 It has been a lively festive period for Portuguese wing-back Nuno Tavares in France with Marseille. Not only has the former Benfica defender rediscovered his early-season goalscoring touch, Tavares was issued a red card for a wild kick at an opponent towards the end of Monday’s victory at Montpellier.

Speaking after the match, Marseille boss Igor Tudor confirmed the Arsenal loanee will face minor punishment in order to curb his behavior in the future, having witnessed Montpellier threaten to snatch a late point in Tavares’ absence.

Tavares made headline earlier this season when he scored three goals in the first four matches of Ligue 1, following his arrival from the Gunners. He grabbed his fourth of the campaign during last week’s 6-1 triumph over Toulouse, before again showing his finishing prowess with the opener as Marseille went 2-0 up at Montpellier last night.

Marseille appeared to be coasting to victory with a two-goal lead heading into the final stages, but a rush of blood saw Tavares sent off with five minutes remaining. The Portuguese hacked down Montpellier defender Arnaud Souquet inside the opposing penalty area, after which the referee was introduced to consult VAR, with the replays condemning Tavares to an early departure.

Tavares was jeered by the home fans as he left the pitch and responded by gesticulating the scoreline. The evening threatened to take on a particularly sour note for the wing-back when Montpellier pulled a goal back in injury time, but Marseille held out to claim all three points.

This guy can finish pic.twitter.com/ZPXfcq2uYb

“He lost his mind, yes!” said Marseille coach Tudor after the match. “He’s going to be fined, maybe that will serve as a lesson to him, because he’s still young.”

Tavares goal-haul of five in the French league represents a major new addition to his game, having scored just two league goals in his career prior – one for Benfica; one for Arsenal. The Lisbon native has been used in a wing-back role to exploit his qualities, producing exciting results and raising the possibility of a second stint with Mikel Arteta’s Premier League leaders next season.