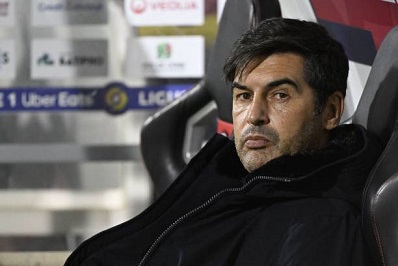 Paulo Fonseca says he was disappointed by the treatment of his players from sections of the Lille fanbase during last night’s draw with Reims, and has suggested he could leave the club as a result.

Lille fans whistled on occasions when the team played the ball backwards, in what is a key principle of Fonseca’s desire to build the play from defence. The match ended 1-1 and following the final whistle, Fonseca spoke candidly about the atmosphere in the stadium.

“I’m a little disappointed, in fact very disappointed with the fans,” Fonseca told RMC Sport. “They always supported us at all times, but today they did the opposite when the team needed them.

“I’m not used to that. It wasn’t correct. In the first half, when the ball reached Lucas [Chevalier, Lille goalkeeper] they started to whistle the team. If players play like this, it’s because I ask for it. If anyone is to blame, it’s me. If they have to protest, they should protest against me, not against the players.

Upon hearing the quotes, Lille president Olivier Létang supported the coach. “I think it’s unfair, we’re one of the teams that plays the most beautiful football,” said Létang. “Paulo Fonseca is doing an extraordinary job, he is a fantastic coach and we all need our supporters, even in the most difficult moments.”

Lille, who sold a number of key players in the summer – including Renato Sanches to Paris Saint-Germain – are currently 7th in Ligue 1. Fonseca arrived on a two-year deal last summer, having left Italian side Roma at the end of the previous season.