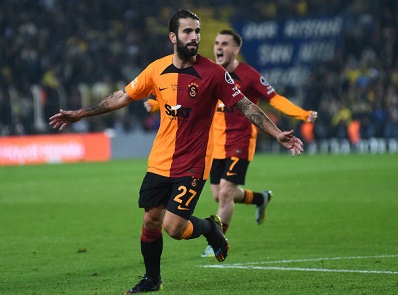 Sunday’s Istanbul derby proved a disaster for Jorge Jesus’ Fenerbahçe, who were thrashed 3-0 at home by city rivals and Super Lig leaders Galatasaray at Ülker Stadium.

Portuguese midfielder Sérgio Oliveira scored the all-important opener to give Galatasaray a half-tie lead, following which late goals from Kerem Aktürkoğlu and Mauro Icardi means Fener slip four points behind their rivals at the top of the table.

Both sides fielded a Portuguese in their midfield for the clash on Sunday afternoon. Miguel Crespo, currently heavily linked with a move to Spanish side Sevilla, took his place in Jesus’ home line-up, while former Porto Sérgio Oliveira continued for Gala in his first season with the club. Oliveira proved decisive, putting the visitors ahead on 32 minutes with a crisp right-footed strike.

Huge goal for Sérgio Oliveira yesterday as he got the opener in Galatasaray’s 3-0 derby win at Jorge Jesus’ Fenerbahçe pic.twitter.com/q2eD3MrLcq

Crespo and Oliveira were substituted late in the game, as Galatasaray put the shine on the three points with further goals either side of a red card for Fener’s Irfan Kahveci. Speaking after the match, Jesus assumed responsibility for the defeat, but played down the impact of the result on the fight for the Turkish championship.

"It was a game in which we made more mistakes than usual,” Jesus conceded. “We were the ones who created the most chances in the first half, but Galatasaray scored on a rebound. We started the second half well, but we conceded the second goal and had a man sent off. Things got complicated after that. Galatasaray were the calmer team.

"I had said that, winning or losing, this game would not decide the champion. And I maintain that opinion. The champion was not decided today. Of course, we did not take advantage of the chance to get ahead of our opponent. I am responsible for what happened today. I don't blame anyone, if anyone is to blame, it's me.

"According to most people, we were the best team in the league. Now, of course, our opponents overtook us. Things got tough for us especially in the second half. The players were nervous and that got worse when we lost a player. It's the sixth time this has happened this season. It's the most important problem we have to solve at the moment. I've never had a situation like this happen to me in the other teams I've managed."

We were the better side - Oliveira

“Oliveira, meanwhile, told reporters: “It’s only three points actually. But it was an important match, of course. The club, the fans, everyone was very happy at the end of the match, I'm sure. Our match performance was good. We can say that we were the better side. We are proud that we won 7 games in a row. We need to keep working on the way to the championship. We apply new treatments. I can say that my relationship with the team is very good. We work together with the healthcare team and my friends.”

The Portuguese was asked, “If you were a journalist, what headline would give for Galatasaray's victory?" He answered: “I would just say 3 points for Galatasaray. We are happy to win in this stadium. It is most important to us that the team and the fans are happy. We celebrate this together.”