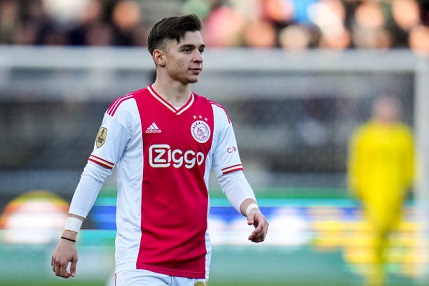 Portuguese winger Francisco Conceição was issued his first Eredivisie start of the season by Ajax at the weekend. The Dutch champions were held to a 1-1 draw at NEC, but Conceição impressed enough to earn praise for his performance.

Ajax boss Alfred Schreuder was without key players Steven Berghuis and Mohammed Kudus for the trip to Nijmegen, meaning 20-year-old Conceição was drafted in for a full league debut and his first start since joining from FC Porto in the summer.

Conceição had a hand in Ajax’s goal, picking out Dusan Tadic who found Davy Klaassen for the midfielder to put the visitors ahead. NEC replied in the second half through Congolese forward Landry Dimata, leaving Ajax without a win in four matches.

“He brought good energy to the team and gave width to our game,” Schreuder said of Conceição. “When Francisco has the ball, you feel that the opponents have the idea that something can happen. That gives you that extra space and allows the other players to be more free.

"We've already seen what he can do in training and in the B team. It's the path he has to follow. Today, Francisco was lucky that Berghuis and Kudus, usual starters, were out, but he left a beautiful business card and that's very important.

"It doesn't matter if he would be a starter or not under other circumstances. Today, it was confirmation that he is on the right path.”

Ajax are currently in 2nd place in the Eredivisie, three points off leaders Feyenoord.