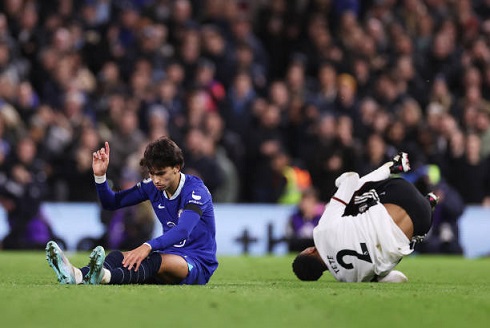 João Félix had an eventful debut with new club Chelsea on Thursday against local rivals Fulham in England. The Portugal international shone initially on his first Blues outing, but was sent off in the second half for a miss-timed challenge as his team suffered another defeat.

Fulham’s victory lifts them into 6th place in the Premier League, continuing a sensational return to the top flight for the Cottagers under Portuguese boss Marco Silva.

Félix, whose loan move from Atletico Madrid was confirmed earlier this week, was thrown straight into the Chelsea line-up by manager Graham Potter. Within two minutes, the former Benfica forward had skipped past Tim Ream and created good opportunities for Kai Havertz and Lewis Hall. Félix continued to threaten and such was the home side’s concern with his influence, Fulham were issued two yellow cards for fouls on him inside the opening 13 minutes.

Félix tested Fulham goalkeeper Berndt Leno on a number of occasions, but the 23-year-old’s evening would end before the hour mark through a straight red card. With the score level at 1-1 following Willian’s opener and Khalid Koulibaly’s equaliser, Felix went to ground to contest the ball with Kenny Tete, catching the Dutchman on the shin and earning a dismissal.

Fulham went on to take all three points thanks to a winner from former Benfica striker Carlos Vinicius, lifting them above Liverpool into 6th place in the table. Seleção midfielder João Palhinha once again impressed in midfield, amid reports that some of English football’s biggest clubs are targeting him for a summer transfer.

“João was having a fantastic impact on the game, you could see his quality, to lose him and for three matches is just really disappointing,” Chelsea manager Potter said after the game.

“João is a young player, he’s a top player, you can see his quality and what he brought to the game. I don’t think there was any malice in the challenge at all. It was a little bit high of course and then the referee has got a decision to make. He’ll learn from it.

“I don’t think it was an emotional one from João, it didn’t feel that way to me. It was just a miscontrol maybe and then just a football action that can happen in the speed of the Premier League and a game of football at this level.

“There was no malice, he didn’t want to go and hurt anybody, he didn’t lose his head, it was just what it was. Sometimes these things happen and they work against you and you have to suffer and believe me we are suffering at the moment.”

A fantastic season for us - Silva

Victorious Fulham coach Marco Silva said: “It was a great night for our fans, after 16 years they deserve it. Chelsea are a massive club, their budget is completely different, we can’t compare anything but with our work, strategy, identity we could do it and we did it.

“For our football fans it’s special. I felt it after the final whistle in that moment, the way they celebrated with our players. A really important moment. Another three points for us - and I know in Premier League all the points are really tough to get.

“It’s been a fantastic season so far for us, but we know we’re just in the middle of the season. I still see a big room to improve. This is one of the positives I take from the game. We won the game, but big room to improve and we’ll keep working hard with our players.”

Man doesn't get much worse than that for a debut. Hopefully he will rebound and at the same time as a fan I can see what he's made of because the English media will eat him alive. I wish him all the best.

I think they should be eating him alive, that tackle (if you can even call it thought) was so unnecessary and just so poorly timed. It did not appear that he lost his composure or anything like that, it was just a very very poor decision. The...

I think they should be eating him alive, that tackle (if you can even call it thought) was so unnecessary and just so poorly timed. It did not appear that he lost his composure or anything like that, it was just a very very poor decision. The only other explanation is that he spent the prior night watching 90's Premier league fixtures on Youtube... that challenge might have gotten a yellow back in those days!

Bloody hell. I want this guy to succeed so much, but Jesus! Time to learn some lessons Felix my boy.

Santos
There are no comments posted here yet