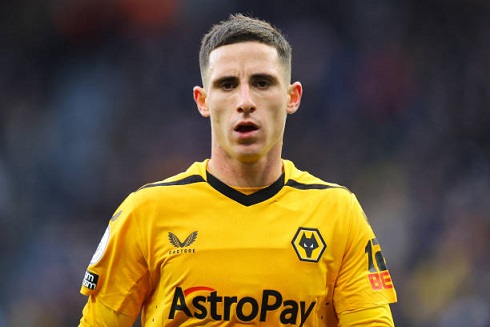 There is little doubt over the most discussed Portuguese goal of the weekend. Bruno Fernandes’ controversial equaliser in Manchester United’s derby win over Manchester City rumbles on as the major talking point in English football.

However, Luso stars hit the net elsewhere across the continent, including a vital winner by Daniel Podence for Wolverhampton Wanderers in the Premier League. In Italy, forwards Beto and Rafael Leão were both among the goals, while Fábio Martins caught the eye in Saudi Arabia with a brilliant strike for Khaleej.

Bruno Fernandes controversial goal at Old Trafford stole most of the headlines on Saturday, but Daniel Podence scored an equally important goal for struggling Wolverhampton Wanderers later in the afternoon. Wolves overcame West Ham United 1-0 at Molineux, and it was Podence who stepped up to assume the role of match-winner.

Wolves boss Julien Lopetegui selected six Portuguese for the clash with West Ham, with both sides coming into the game in the relegation zone. José Sá was in goal; Nélson Semedo continued at right-back; Rúben Neves was joined by Matheus Nunes and João Moutinho in midfield; Podence played on the left of the attack. Toti was a late introduction from the bench.

After a goalless first half, the breakthrough arrived just a few minutes after the restart and there was inevitably high Portuguese involvement as Wolves broke from defending a corner. Moutinho found Podence and the ball was quickly shifted to Semedo, who carried possession into the opposing half and passed to Nunes to, in turn, tee up Podence to connect with a first-time strike into the bottom corner from the edge of the penalty area.

The goal was Podence’s 5th of the season and after the match captain Neves suggested the tide is turning at the club following a poor first half of the season. “We are really happy to have the three points in front of our fans, at Molineux,” said the former Porto man. “Thank you to the fans because they made a fantastic afternoon for us, and I hope we did a great afternoon for them as well.

“It was like in the old times today; a fantastic atmosphere, with everyone pushing for us, so let’s hope everyone can build on that because that’s what we want to feel when we’re at home.

“People are working really hard, there’s a lot of intensity in training and everyone is involved, every single player in the squad knows that he can play and he can help the team, and that is fantastic for us as a squad. Every single player is ready to play and ready to help the team, and that is our mentality. It’s how we want to go from now on.”

The Italian championship takes an intriguing look as Napoli once again pulled away at the top of Serie A, threatening to win their first title in 36 years. With Mário Rui at left-back, Napoli hammered Juventus 5-1 on Friday evening, heaping the pressure on defending champions AC Milan ahead of their trip to Lecce the following evening.

The Rossoneri again dropped points in Apulia, but had Rafael Leão to thank for inspiring a comeback from 2-0 down in the second half. The Portuguese halved the deficit on 58 minutes, catching Lecce goalkeeper Wladimiro Falcone out at his near post with a well-struck finish for his 8th league goal of the season. More dropped points for Milan sees them fall nine points adrift of Napoli as we approach the halfway point of the season.

Most successful dribbles in Serie A?

Leão is not the only Portuguese putting his name among the league’s top goalscorers. Ex-Portimonense striker Beto got his 7th Serie A goal of the season in Udinese’s 2-1 defeat at home to Bologna. Beto’s brilliantly-taken finish opened the scoring in the 10th minute, but Udinese were pegged back by two second-half goals to extend their winless run to ten matches after a strong start to the campaign.

Some expert finishing from Beto this weekend pic.twitter.com/iG3IUck0EB

Fábio Martins produced the goal of the weekend from a Portuguese perspective, scoring with the deftest of lobbed finishes for Khaleej in Saudi Arabia. Martins scored twice against Al Wehda in a 3-2 victory, with the winner in the 87th minute from an acute angle worthy of deciding any match.

Finally, Carlos Fortes scored his first goal for new club PSIS Semarang in Indonesia to give them a 1-0 win at RANS Nusantara, while in Greece there was a consolation penalty by João Pedro in Panaitolikos’ 4-1 loss to AEK Athens, and Rafael Lopes scored for Cypriots AEK Larnaca in a 4-3 win over Aris Limassol.

Wow, that Beto goal was fantastic!

Good thing Santos left Leao on the bench for most of the World Cup....

Its an absolute crime that Santos left Leao on the bench. Leao is the best young Portuguese talent, he's already one of the best in the world consistently delivering for Milan and thats why he's Serie A's best player.

In the future Leao will be...

Its an absolute crime that Santos left Leao on the bench. Leao is the best young Portuguese talent, he's already one of the best in the world consistently delivering for Milan and thats why he's Serie A's best player.

In the future Leao will be vying for a top three Ballon d'Or spot alongside Mbappe. Leao has it all!

If I were the coach I would've played a front three with Rafael Leao left wing forward, Ronaldo up top, and Joao Felix right wing forward.

We need players who are game changers game winners and Leao is a player like that.

Moving forward I hope he is a regular starter for us. Lots of people seem to think Goncalo Ramos or Joao Felix or Bruno Fernandes will be the game winner for us, but I disagree. Sure they have generally good talent, but none of them are the complete package to be really phenomenal.

Leao has it, he is that guy. Hope Martinez has the vision and makes him a mainstay in the team.