Bruno Fernandes: Portugal midfielder speaks on no longer being a ‘stat-padder’ 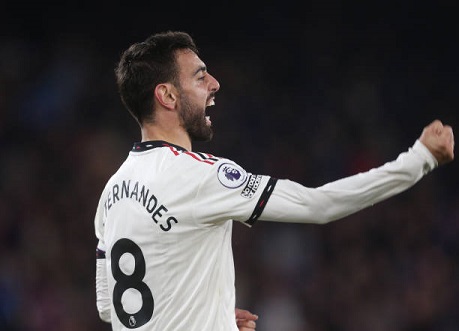 “I didn’t know he was given the Man of the Match, but he was definitely my Man of the Match,” said Manchester United manager Erik ten Hag when discussing Bruno Fernandes’ performance in the recent Manchester derby. The Dutchman does not offer individual praise easily, but his eulogising of the Portuguese has become a common occurrence.

Fernandes has undergone somewhat of a transformation since Ten Hag’s arrival at Old Trafford last summer, developing into a more rounded player whom his manager describes as key to the team’s style of play. Two goals last week against Manchester City and Crystal Palace certainly helps the team’s attacking potential, but Fernandes’ qualities are considered much more varied this season.

“He’s playing a massive role in a lot of moments of football for us: in building up attacks, creativity, movement, but also in transitions, in both sides, in the defensive transitions he’s magnificent and doing a really good job so I’m really happy with his performances,” Ten Hag said earlier this season.

After a typically committed showing in the 2-1 win over Manchester City which saw Fernandes score and named the Man of the Match, Ten Hag was again thorough in his praise. “The idea [of playing him wide] was that we defend as usual, but in possession he had a role to come in between the lines, to give us an extra player there to bring problems, hesitation and confusion to the opponent.

“He played that role really brilliant. On the right, on the left also. We had really good breaks by finding the free man and Bruno was an important factor in that role. He was important in the pressing as well. I did not know he was Man of the Match, but he was my Man of the Match definitely: Bruno Fernandes!”

“Doing the job which is difficult to see”

The respect appears mutual. Fernandes praised Ten Hag’s implementation of a hard-line discipline at the club as early as pre-season, suggesting the new man at the helm had set about eradicating allowances previously afforded to the players which perhaps bred complacency.

Speaking to the media late last week, the former Sporting man assessed his season so far, during which he has scored five goals in all competitions. Having struck 28 in his first full season in Manchester, the drop-off in goals has come amid a greater appreciation for Fernandes’ contribution to other phases of the game, with many feeling he has matured into more of a team player.

“Obviously straight after I arrived, I was scoring a lot of goals and I was in a good moment and the team was winning a lot, but the team did not achieve great things,” Fernandes said. “For me great things is winning trophies. My performance was individually getting my goals, my assists, and I was called a stat padder.

“Now that I’m playing probably better football but not having those stats, it’s quite difficult for people so they get into the reverse. For me the main thing is doing the best for the team and the manager has been saying I’m important, performing well the way he wants, the way the team needs, and that’s the most important thing for me.

“Obviously, I want to get my goals, I want to get my assists. I won’t say I don’t because I want that and I still think I can perform at this level and get the goals, assists. But at this moment I’m more creating spaces and doing the job which is difficult to see but is important for the team.

“That’s the main thing for me, to keep helping the team and we have been winning games in the way I’ve been playing so, there’s something good in what I’m doing.”