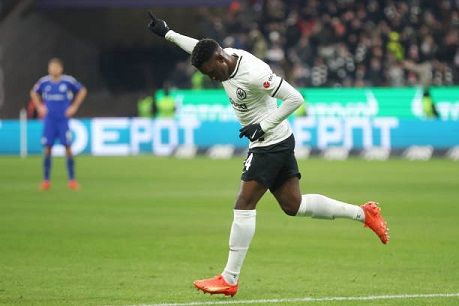 This weekend may have been unusually quiet for Portuguese goalscorers abroad, but there were still some pleasing stories of Luso players finding the net at new clubs.

Injury-hit full-back Aurélio Buta has been forced to wait until the second half of the season to make his debut for Eintracht Frankfurt in Germany, but celebrated his first match in style with a goal in their win over Schalke. Meanwhile in England, João Ferreira was handed a first start for new club Watford and responded by scoring an excellent goal in the Championship.

Former Benfica right-back Aurélio Buta joined Frankfurt at the end of last season after his contract with Belgians Antwerp expired. The 25-year-old signed a four-year deal on a free transfer, but a knee injury which initially ruled Buta out until September ended up costing him the first half of the campaign at his new club.

Buta ramped up his recovery during the World Cup break and made an impressive non-competitive debut in Eintracht’s 2-2 friendly draw with Lech Poznan in Dubai earlier this month. Buta assisted the first goal and scored the second, impressing manager Oliver Glasner. “He played a very good game, and not just because of his goal. He was very present and conspicuous. I hope he remains stable,” said Glasner.

The weekend saw the return of the Bundesliga and Buta’s first appearance in German football could scarcely have gone better. Introduced by Glasner with Eintracht 1-0 up against Schalke, Buta ended up scoring the third goal in a 3-0 victory, lashing an impressive finish into the top corner during stoppage time.

“I can’t believe it,” Buta told the club’s channel after the game. “It’s a really good feeling, because after such long months without playing, without training, it’s good to be back on the pitch. Especially to score my first goal for this club, who helped me a lot since I arrived. So I’m really happy.

“My family helped me a lot, also everyone here in the club helped me a lot during my injury and I think this gave me the energy to keep going. I worked a lot to be here. I was always in the gym, it was not possible to be outside training with the boys. And so I think this is a gift for all the hard work in recent months.”

Ferreira on the mark as Araujo arrives at Watford

Promotion-chasers Watford are now a club with significant Portuguese interest, having completed the loan signing of Benfica striker Henrique Araújo. The 21-year-old’s arrival sees him link up with fellow signing from the Eagles João Ferreira, who marked his full debut with the club by scoring an impressive individual goal at the weekend.

Ferreira signed for the Hornets on a permanent deal earlier this month on a long-term contract until 2027. The right-back, 21, was issued his first start by manager Slaven Bilic for Saturday’s home match against Rotherham, and while a 1-1 draw was a frustrating result – Ferreira produced the moment of the match with a well-taken equaliser in the second half.

Former Benfica man João Ferreira marked his full debut for Watford with a brilliant goal from right-back. What a start!
pic.twitter.com/p4onfPufjs

“It was a good game, I’m happy to have scored the goal,” Ferreira told the media. “It gave us a point but the work came from the whole team. We’re happy for a point but wanted more. I got the ball and started to drive and when I looked up I was alone and I thought, ‘I’ll try my luck’ and it happened. I didn’t know it was definitely going in, but I knew it was a good shot and I hoped!

“I’m getting used to it here. It’s not like Portugal, but I’m enjoying it, and that’s the most important thing.”

Watford are currently 3rd in the Championship, thirteen points off the automatic promotion places, and therefore would take a place in the play-offs.

There was another first league goal in new colours this weekend, although Ivan Cavaleiro’s equaliser for Alanyaspor in a 2-2 draw against Fatih Karagumruk saw him finally open his Turkish Super Lig account after a goalless first half of the season. On-loan from Premier League side Fulham, Cavaleiro last week scored against Galatasaray in a Turkish Cup defeat, before following it up with a first league goal on his 10th appearance in the competition.

In the Turkish second tier, veteran striker Marco Paixão is the joint-top goalscorer, although his penalty for Altay this weekend came in a demoralising 4-1 home defeat to Pendikspor. In Greece, former Vilafranquense midfielder Frederico Duarte scored for Panaitolikos as they were held 1-1 at home by PAS Giannina.