“From today onwards, I am Polish” – former Portugal boss Fernando Santos steps back into management 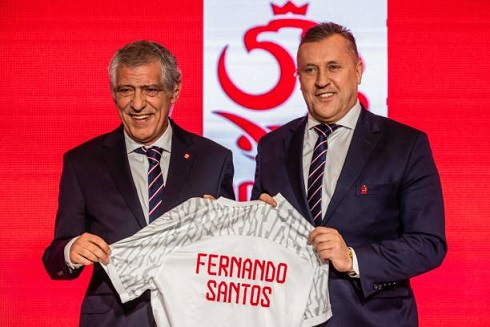 Fernando Santos was introduced to the media as new manager of the Poland National Team on Tuesday. The veteran Portuguese has signed a contract valid until the World Cup 2026.

Santos saw his reign as Portugal coach ended in December after the Seleção’s World Cup elimination in Qatar, leaving as the manager who has delivered the only two trophies in his country’s history.

Poland had been searching for a new chief in recent weeks, having opted against extending the contract of Czesław Michniewicz. Fellow Portuguese Paulo Bento was thought to be close to getting the job, but instead Santos, who replaced Bento as Portugal manager, was awarded the position after talks in Warsaw.

“Poland is a great country, with a huge history, a huge culture, similar to the level of its national team,” Santos told the media. “It is a team with many quality players, it is one of the teams that went to the World Cup. For me it is something rewarding, being able to continue this career as a coach in a country with so much influence, with so much quality. From today onwards I am Polish, I am one of you.”

Inevitably, Santos faced questions about his countryman Paulo Sousa, who quit his role as Poland coach a year ago to join Brazilian club Flamengo in controversial circumstances. Santos was also asked whether he considers himself a pragmatic coach.

“I’m a friend of Paulo [Sousa], I’ve had a relationship with him for many years, we were together in the youth teams in Portugal,” he said. “We’re different people. I never analyse the work of my colleagues. Thinking we’re better or worse is just because we have different styles.

“Pragmatic? If you think winning is being pragmatic, yes. I don’t understand the defensive issue. We scored a lot of goals. Is that pragmatism? No. No team in the world wins without balance. To win, you have to play well. Preferably very well. We have to take advantage of all the talents.

“I have an expression that I use often: I only know stars in the sky. And I’ve never seen one there alone. The team has to be a group of stars.”