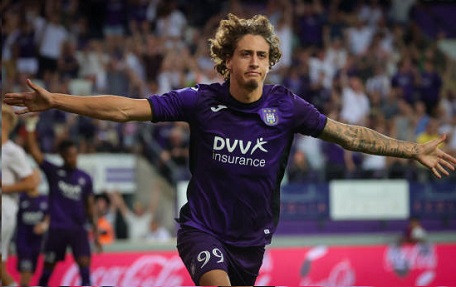 Fábio Silva has completed a loan move from Wolverhampton Wanderers to Dutch giants PSV Eindhoven. The former Porto striker cut short a season-long deal with Anderlecht in Belgium ahead of joining PSV on a temporary move until the end of the current season.

Upon being paraded at the Phillips Stadium, the 20-year-old admitted to being excited at the chance of being coached by renowned former Netherlands international forward and current PSV boss Ruud van Nistelrooy.

Silva’s spell with Anderlecht came to a premature end in recent days, with reports suggesting a fallout between the player and management was the cause of his departure. The story has been denied, but after a bright start to the season Silva abruptly leaves Brussels to cross the border and take on a new challenge in the Eredivisie.

“I want to share my gratitude with this amazing club and their supporters,” Silva said of Anderlecht, for whom he scored 11 goals in 33 appearances during a troubled season so far for the club. “They believed and trusted me at a time when many doubted.

“Also a special word to my teammates: thank you for all the support and joyful moments inside and outside the field. True friendship has been built. As appreciation is something essential in my life it shall be said that they all together gave me the opportunity to be happy again, doing what I love most!! Thank you for helping my growth as a person and as a player!!

“And to the incredible fans: You were essential in supporting the team and myself, despite the results not always being what we had expected. I will always be one more to support this massive club, undoubtedly the biggest in Belgium. Mauves.”

Van Nistelrooy one of the best

Silva was paraded by PSV on Wednesday afternoon, and his first words in his new settings included plenty of discussion about his new manager. Ruud van Nistelrooy, who took charge of his ex club PSV last summer, enjoyed a prolific career for clubs such as Manchester United and Real Madrid.

“The manager was one of the best strikers in the world,” Silva explained. “I am young and now I get a chance to work with him. I’m also a striker, so I’m happy to learn a lot from him. Great things even. I’m here to listen.

“I saw him play against my father. And he scored, so that wasn’t really that good. But everyone knows him, his qualities and the goals he scored. I am a young striker and as a twenty-year-old I get the chance to work with him. That is fantastic, unique and something special.

“For me this is the right step in my career. Since I arrived here I have tasted the atmosphere. Also in the stadium. That was fantastic. PSV is one of the best teams in the Netherlands. Many young players reach a high level here. Together we will try to achieve our goals. I have played a lot at Anderlecht in the past six months. I’m fit and ready. I prefer to start as soon as possible. Work hard, play with the ball and enjoy it.

“I can bring a lot of energy. And I want to have the ball, like to run and bring power. I help the team with goals and assists. But I am more than a pure goal scorer.”

PSV are currently 3rd in the Dutch top flight, three points off leaders Feyenoord. Silva could make his debut during Saturday’s home clash with Go Ahead Eagles.