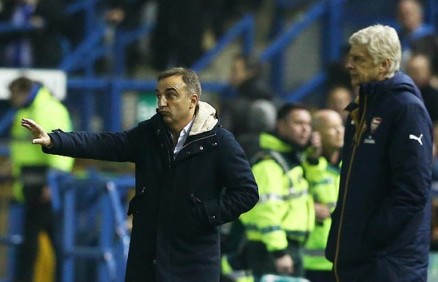 Former Nacional striker Lucas João scored one of the goals.

The London giants had been in good form recently culminating in a win against Bayern Munich in the Champions League last week, but Carvalhal and his Championship side took full advantage of Arsene Wenger's decision to heavily rotate his team.

Carvalhal, whose appointment by the English club took many by surprise both in Portugal and the UK, heaped praise on his players at the end of the game.

"Everything belongs to the players, they were fantastic. We put a plan together and they did it 100 per cent. It's an important victory for the club. We deserved what we got."

Sheffield Wednesday have had a Portuguese connection for several years through veteran holding midfielder José Semedo, who has become something of a cult hero at Hillsborough and feels a deep bond to the club, as explained in an exclusive interview with PortuGOAL last year.

Since the summer the Portuguese connection has significantly augmented, with Carvalhal bringing former Nacional striker Marcos Matias and midfielder Filipe Melo (ex Moreirense) into the squad to join Semedo and Lucas João, as well as three compatriots as part of his coaching team, João Mário, João Cunha and Bruno Lage.

After some indifferent results at the start of the season, Wednesday have put together an impressive 9-match unbeaten run. The Owls currently sit 9th in the championship (England's 2nd tier), four points outside the playoff places, and knocked out another Premier League Cup, Newcastle United, in the previous round of the League Cup.

Is Carvalhal set to add to the growing list of Portuguese coaches making a name for themselves throughout Europe? Watch this space.

I understand Arsenals position in resting some players as a precaution. They have been burned in the past for having tired or injured players come end of season.

Regardless, I don't care who Arsenal trot out. They are playing a mid table English...

I understand Arsenals position in resting some players as a precaution. They have been burned in the past for having tired or injured players come end of season.

Regardless, I don't care who Arsenal trot out. They are playing a mid table English championship team and they got stomped 3-0. Glad Wenger did not claim "injuries".

I am curious about Arsenals next game v Bayern (Nov 4) and then Tottenham (Nov 11). Could this lead to multiple loses? They are off to a great start. The next couple games may show us exactly what Arsenal are made of.

Personally I hope they right the ship. I like watching them play. They are one of those teams, win or lose, they entertain!