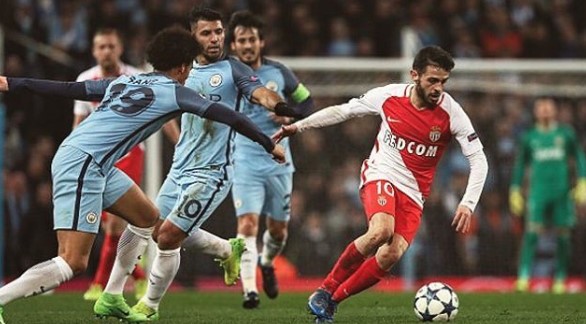 In a year which has seen numerous young Portuguese stars start to truly blossom and make a name for themselves (João Mário, Nelson Semedo, André Silva), Bernardo Silva is arguably the pick of the bunch. The Lisbon native has produced bewildering performances on a consistent basis, and is widely considered the best player in France’s Ligue 1 thus far in the 2016/17 season.

Appearing for the French outfit 28 times, he has contributed 8 goals and 5 assists. To many, that may seem inadequate given the alleged fee Monaco are demanding for the majestic attacking midfielder (£70 million). However, Silva offers far more to Monaco’s attacking blitzkrieg than simply goals and assists, as he displayed in Monaco’s valiant performance against Manchester City on Tuesday night.

Predominantly featuring on the right-hand side, the splendid left foot Silva possesses means that more often than not he’ll cut inside, occupying two, if not three defenders in the meantime. Doing so opens acres of space for onrushing runners who then have the perfect opportunity to whip in a teasing ball, just as Fabinho did against City for Monaco’s equaliser.

Of course, in situations like this much of the credit will deservedly go to the goalscorer and/or whoever provided the assist. But, time and time again, Bernardo Silva has instigated such moves, helping metamorphize Monaco into Europe’s highest scoring side this season. 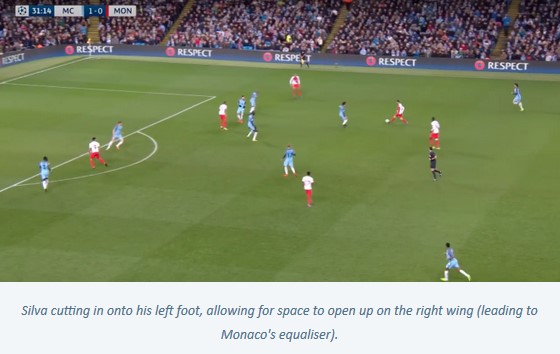 Indeed, Bernardo Silva’s key attributes on a football pitch are obvious for all to see: audacious technique, intricate dribbling, exquisite vision. He epitomises what a true old-fashioned number 10 should be. As is often the case with left-footed playmakers, Silva is heavily reliant on his stronger side but his play is far from predictable. The former Benfica man enjoys cutting inside most of the time he receives the ball wide on the right, and will often either make a direct run towards goal, or will simply play in the overlapping runner.

The footballing brain Silva has is one of his greatest attributes, and given he’s only 22 years old, his decision-making is sublime. The Portuguese magician very rarely loses possession and has accumulated an average passing accuracy of 81.4% in all competitions this season, highlighting his maturity on the ball.

In addition to his ability to keep possession and make good use of the ball, he has an innate instinct to know whether to dribble, pass or shoot in any given scenario. This has been key for Monaco and was evident against Manchester City, where he provided an outlet as the Monaco defence struggled to soak up an onslaught of attacks from the English giants.

Bernardo Silva's passing statistics in all competitions, courtesy of whoscored.com

Once in the final third, whether out wide or in a goalscoring position, Bernardo Silva will think quick and execute fast, with the utmost composure. As well as a provider of sublime assists, he is a more than capable finisher, where his positioning is key. Knowing how to be in the right place at the right time, Silva has even found the net twice this season with headers despite his diminutive size, while most his goals have come from in and around the 18-yard box, calmly slotting into the net with his majestic left-foot.

Of late, Silva has adapted his game to become more adventurous. In his last four away games in the league he’s scored four goals. Two of them were headers where he started the moves, receiving the ball on the right, cutting in slightly, playing a ball out wide to the progressing full-back, then making a darting, direct run into the box and meeting the cross with his head, finishing like a true poacher.

If rumours are correct and Silva moves to the Premier League, some may fear his small stature could present problems amid the physicality and fast-paced nature of English football. But although Silva’s physique is by no means imposing, he has shown in his performances both domestically and internationally that he is undeterred by bigger opposition, producing countless vigorous defensive displays.

He has averaged 1.2 tackles per game in all competitions, along with 0.8 interceptions. These numbers are by no means staggering. However, given how much Silva contributes to Monaco’s attack, the fact he’s able to devote that much defensively on a game-to-game basis epitomises his work ethic and his realisation of the importance of defending as a unit – a trait that many managers in England will be licking their lips at, namely José Mourinho and Antonio Conte. Not to mention Seleção coach Fernando Santos. Watch this space.

Bernardo Silva is undoubtedly the most gifted playmaker Portugal has produced since Rui Costa, and he is the first world-class #10 the Seleccao has had since Deco. While others may prefer a more out-an-out winger like Quaresma or Gelson Martins...

Bernardo Silva is undoubtedly the most gifted playmaker Portugal has produced since Rui Costa, and he is the first world-class #10 the Seleccao has had since Deco. While others may prefer a more out-an-out winger like Quaresma or Gelson Martins to get the start, I feel Bernardo Silva is the best suited to operate as the right-sided midfielder in Fernando Santos' narrow, 4-4-2 formation, especially since he has been absolutely brilliant in that exact same role for Monaco this season. As Marino mentioned, his ability to link up with attack-minded, overlapping right-backs is a joy to behold, and with the likes of Nelson Semedo, Joao Cancelo, Ricardo Pereira, and Cedric Soares at the right-back position, it's only a matter of time before Portugal has one of the strongest right-back/right-wing combinations in world football! And let's not forget about the left wing. A left-sided tandem of Joao Mario and Raphael Guerreiro has the potential to be just as exciting.

The only position where we seem to lack future depth is at center-back. Pepe and Jose Fonte are still solid short-term options, but after these two veterans, our options are extremely limited. Bruno Alves' best years are behind him, Luis Neto is solid but certainly not world-class, Paulo Oliveira has potential, but he's struggled to get playing time ahead of Ruben Semedo and Sebastian Coates. Ruben Semedo is perhaps the most promising young center-back that Santos has at his disposal, but he still seems to be far too error prone at the moment to be trusted with a spot in the starting 11 in a competitive match.