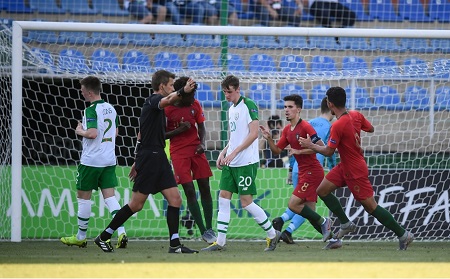 Portugal punished Republic of Ireland 4-0 at the Banants Stadium in Yerevan to reach the UEFA U19 European Championship Final. Vítor Ferreira’s penalty put Portugal in front, Gonçalo Ramos securing his hat-trick in added time as the Seleção made it to their third successive final after winning the tournament in 2018 and finishing runners-up in 2017.

Having scored 12 goals and conceded just one in the tournament so far, Portugal look in with a strong chance of lifting the trophy for a second straight year.

Portugal manager Francisco Ramos made one change from the side that beat host nation Armenia 4-0, striker Gonçalo Ramos coming back into the starting side for Tiago Rodrigues. Ireland were missing midfielder Lee O'Connor and striker Jonathan Afolabi.

Gonçalo Ramos was keen to get involved early on as he headed Félix Correia’s cross over the bar. Republic of Ireland were showing little initiative with most of their men behind the ball, Fábio Vieira with the first meaningful attempt on goal with a shot from distance narrowly wide.

Vieira had another chance that was weak and straight at Ireland goalkeeper Brian Maher. Félix Correia was busy on the left wing, attempting to beat Andy Lyons but frequently running into traffic.

Portugal eventually made the breakthrough from the penalty spot, Fábio Vieira feeding João Mário who was taken down by Joseph Hodge. Vítor Ferreira stepped up and scored his second spot kick of the tournament with little fuss.

Ireland push for an equaliser

Ireland decided to play football and went close to equalising on two occasions. Ali Reghba scooted down the right wing, his cross finding Barry Coffey who saw his shot cleared off the line by Costinha.

Their next attempt was even closer, Matthew Everitt playing in Kameron Ledwidge who found Mark McGuinness with his shot cannoning off the bar. As we had seen in Portugal’s previous matches in the tournament, wingers João Mário and Félix Correia switched flanks and were immediately involved in Portugal’s second goal.

Gonçalo Ramos had a headed chance that went over the bar but he didn’t have to wait long to get another opportunity. Correia cut inside, released Mário whose cross found Ramos unmarked at the back post who headed Portugal into a 2-0 lead on the stroke of half time.

The second half started with Correia’s cross finding Gonçalo Ramos but his attempt on goal lacked power. He didn’t have to wait long for another chance, on the hour mark he made it 3-0 and put the game to bed.

Vítor Ferreira played João Mário into space, the winger cutting the ball back to Ramos who finished emphatically. Ireland’s players began to think about the journey home as there was no way back from here. 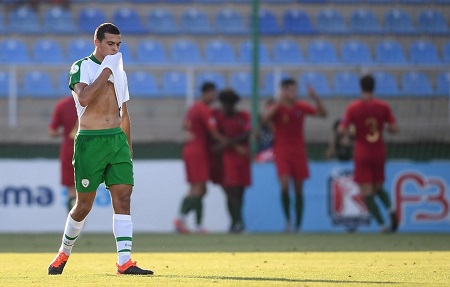 Manager Felipe Ramos made his fifth and final substitution with Levi Faustino replacing Gonçalo Loureiro. Ireland’s frustration at their feeble attempts to mount a serious challenge was evident in Festy Ebosele’s late challenge on Daniel Silva.

Tom Mohan’s side had one last chance to score a consolation goal, but Kameron Ledwidge’s rising free kick was tipped over the bar by Celton Biai. There was still time for Gonçalo Ramos to score his hat-trick however and he made no mistake.

Daniel Silva played him in, Ramos toying with Mark McGuinness before firing a shot between the central defenders legs. Goalkeeper Maher had no chance as Portugal celebrated a third successive U19 European Championship final and a chance to defend their title.

Portugal were a class above Republic of Ireland who admittedly were missing some key players, but this was another efficient performance as we saw in the 3-0 win against Italy and the 4-0 thrashing of Armenia. Felipe Ramos now knows his strongest starting XI with right back Costinha usurping Tiago Lopes and Gonçalo Ramos coming back in for Tiago Rodrigues.

I suggested after the 1-1 draw against Spain that the Seleção appear stronger with Ramos up front instead of Rodrigues, his hat-trick against Ireland proving his worth to the team. Fábio Vieira, João Mário and Félix Correia have been consistent performers at the tournament and they will need to be at their best in the final.

The Seleção await the winner of the other semi-final between three time winners France and seven time winners Spain, against whom Portugal drew 1-1 in their second match at the tournament. The 2019 UEFA U19 European Championship Final will be held at the Vazgen Sargsyan Republican Stadium in Yerevan on Saturday 27 July at 17:30 BST.

Portugal U19 starting formation and line up: 4-3-3