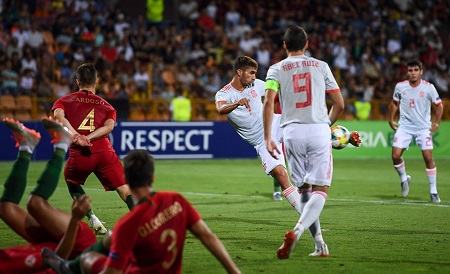 Portugal’s attempts to defend their UEFA U19 European Championship title in Armenia came unstuck after a 2-0 defeat against Spain at Vazgen Sargsyan Republican Stadium. The Seleção were second best throughout and can have no complaints against a Spanish side that were dominant and claimed their eighth U19 Euro title since 2002.

A defensive mix-up allowed Ferrán to Torres volley home in the 34th minute, the Valencia winger scoring his second shortly after half time to give La Rojita an unassailable lead. Portugal’s attempts to get back into the game were thwarted by goalkeeper Arnau Tenas but they can hold their heads high after a promising campaign.

The match began in the same fashion as the group stage encounter with Spain on the front foot. Bryan Gil made space on the left wing and delivered a cross into the box with Abel Ruiz's shot blocked.

Biai flapped at a Spanish corner before wingers Félix Correia and João Mário switched flanks in an attempt to destabilise their opponents. It made little difference as Spain went close with some neat interplay, Sergio Gómez playing a clever 1-2 with Abel Ruiz before firing a shot too close to Biai.

A loose pass from Vítor Ferreira epitomised Portugal’s poor showing, Moha collecting the ball and firing over the bar. Fábio Vieira won the ball in midfield but decided to shoot from a long way out, an alarming sign with teamwork severely lacking despite being in a dangerous attacking position.

Portugal desperately needed to go into the break level but fell behind in the 34th minute. Bryan Gil’s cross should have been comfortably cleared, but Gonçalo Loureiro and Diogo Capitão both went for the ball that fell to Ferrán Torres who finished from close range. Portugal had to be next to score in the second half and Félix Correia tried to make it happen with an attempt that was collected by Tenas. The optimism was short lived.

In the 51st minute Spain took a 2-0 lead that had Portugal staring into the barrel. A smart move down the left wing saw Juan Miranda release Sergio Gómez, his cross evading a number of players before falling to Torres who made no mistake.

Backs against the wall

Félix Correia tried to get the Seleção back into the game once again, racing behind Spain’s defence before cutting inside his marker and forcing a save from Tenas. Filipe Ramos made his first change in the 58th minute with Tiago Gouveia replacing the ineffective João Mário.

Tomas Tavares had been busy trying to initiate attacks from left-back but Portugal were repeatedly running into brick walls as Samuel Costa replaced Vítor Ferreira. Tiago Gouveia went on a mazy run with the ball falling to Fábio Vieira who forced another save from Tenas.

Ramos made two more changes in the 76th minute that highlighted how much Portugal were struggling. Two key players throughout the tournament in Félix Correia and Fábio Vieira made way for António Gomes and Daniel Silva.

Portugal’s frustration was starting to show as Gonçalo Ramos picked up a yellow card for a late challenge on Antonio Blanco. Moha saw another effort go over the bar, Ruiz shot well wide after being played in by Torres but time was running out and Spain burned the clock with late substitutions.

Bad day at the office

Portugal seemed unable to overcome a superior Spain side as they had done in the 1-1 draw in the group stage. Many of Felipe Ramos’ squad are young and inexperienced and it showed in Yerevan. 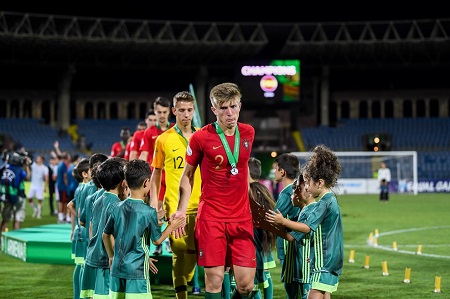 Almost all the key players that had guided Portugal to the final went missing in a match to forget. Despite the disappointment, credit must go to Spain goalkeeper Arnau Tenas having a strong game and Ferrán Torres making the decisive contributions.

Portugal reached their third consecutive U19 European Championship Final which demonstrates that the youth system in Portugal is producing talented players that can compete at the highest level. The dust will settle on this performance that was lacking in a number of areas, but we haven’t heard the last of these players who have every opportunity to go on to have successful club and international careers.

Excellent article Matthew. I however felt that we were lacking in the final third and made the Spanish goalkeeper look good.