Trincão stars as Portugal U21s get off to a winning start 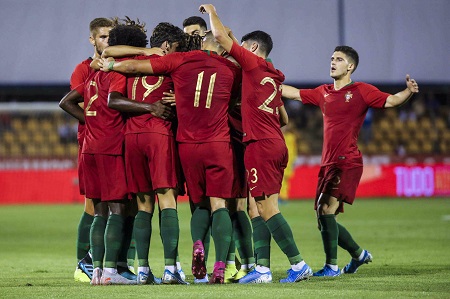 Portugal got their U21 European Championship qualification campaign off to a winning start with a 4-0 victory against Gibraltar at the Complexo Desportivo FC Alverca.

Francisco Trincão opened the scoring, Dany Mota bagged a brace and Diogo Queirós wrapped things up a one-sided match where the result was never in doubt.

It threatened to get out of hand for the tiny nation but they parked the bus and kept it tight. Daniel Bragança shot wide and Hankins denied Trincão who was running rings around his opponents.

Pedro Neto’s cross found Trincão who headed straight at Hankins before Thierry Correia saw his shot deflected off the bar. Goalkeeper Diogo Costa was glad to finally touch the ball, releasing Trincão who combined with Miguel Luís to send a cross in that narrowly evaded Mota and Neto.

Diogo Queiros headed a corner over the bar, Pedro Neto’s shot was blocked and Daniel Bragança narrowly missed the follow-up. Dany Mota earned a penalty just before the break but missed the target after sending Hankins the wrong way.

Mota wouldn’t have to wait long to score his second however, Trincão’s delicious pass evading the Gibraltar defence and finding the Juventus U23 striker who fired into the roof of the net from close range. Six minutes later it was 4-0 with another goal instigated by Trincão. 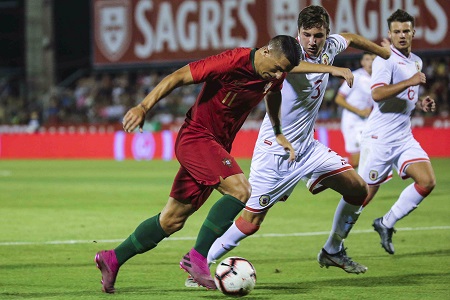 The Sporting Braga youngster showed tremendous skill before cutting inside and forcing a save from Hankins, Dany Mota picking up the rebound and squaring to Diogo Queiros who poked home. Nuno Santos fired over as Portugal went for more goals but they found it hard to create clear-cut chances.

Dany Mota should have had his hat-trick in added time, Diogo Leite steering a corner his way but Mota hit the bar when it looked easier to score. He will be disappointed but it was job done in one of the most one-sided matches this reporter has ever seen.

Man of the match

Francisco Trincão had a field day against the Gibraltar defence, setting the tone with a lovely strike from long range and having a hand in two more goals. It’s curious the 19-year-old hasn’t received more playing time at Braga after flourishing in Portugal’s youth teams.

One particular highlight was during the build-up to Portugal’s fourth goal. Trincão bamboozled James Parkinson so badly, the Gibraltar defender was left lying on the ground and had to be stretchered off. Get well soon son.

Rui Jorge has inherited much of the side that faltered at the U20 World Cup. Two unfamiliar faces in starting lineup were Daniel Bragança & Dany Mota while Domingos Quina was a welcome addition after missing out in Poland.

Dany Mota is likely to eventually lose his starting spot to Rafael Leão, but he did himself no harm with two goals and was a penalty miss away from a hat-trick. Born in Luxembourg, Mota has been bouncing around the lower divisions in Italy and was snapped up by Juventus for €2 million last month.